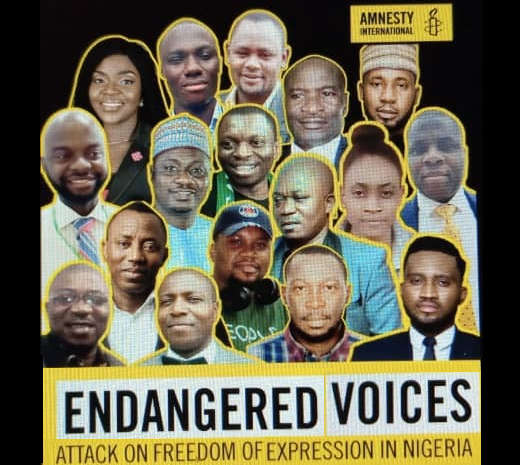 Amnesty International has condemned the frequent assault of freedom of expression in Nigeria. And it has called on the state actors and other relevant authorities to be decisive in putting an end to it as well as other human rights violations in the country.

In a Press statement released and signed by the Country Director, Osai Ojigho stated that several Nigerian journalists are at risk of arrest and assault hence afraid of asking probing questions.

The statement further revealed that Cybercrimes Act is often used as a tool to silence dissenting voices Journalists, bloggers and activists in Nigeria are increasingly harassed, intimidated, sometimes physically assaulted and arbitrarily arrested by Nigerian authorities simply for doing their job or expressing dissenting opinions.

“At least 19 journalists were detained at various times this year, the organization revealed.

According to Osai while speaking at the recent launch of a report “Endangered Voices” a briefing on state of freedom of expression and media freedom in Nigeria in Abuja said:

“Journalists, bloggers and activists are facing increased risks simply for publishing articles and demanding accountability from the authorities. This is totally unacceptable”.

The authorities must immediately put an end to this hostility towards human rights.” she remarked.

Amnesty International has been examining the cases of journalists who were detained, threatened or intimidated over the past five years. The organization’s investigation reveals a disturbing escalation in the authorities’ threats and attacks against Nigerian journalists who have expressed critical opinions of the government on both conventional and social media.

In some cases, security forces intimidated and harassed journalists who had asked
probing questions or expressed critical opinions of government policies. In some states, authorities used security agencies to harass, intimidate and target bloggers and silence dissenting opinions.

The escalating clampdown on the right to freedom of expression and media freedom is mostly perpetrated by the Nigeria Police Force, the military and officials of the
Department of State Services (DSS), Nigeria’s secret police.

Amnesty International Report revealed that Journalists, activists and bloggers face intimidation, harassment or arbitrary arrests when they seek access to information, share information or express critical views which could drive public opinion particularly around issues such as national security, elections or high-profile corruption.

“On 23 July 2016, Abiri Jones, a publisher of Weekly Source, was arrested by members of the DSS, and held incommunicado without access to family or lawyers for two years. He was released on 15 August 2018 and rearrested on 20 May 2018 before being put on trial for terrorism and cybercrimes charges.”

“In October 2018, publisher Ja’afar Ja’afar at the online Daily Nigerian also received
several death threats against himself and his family after publishing videos of a serving governor allegedly receiving a bribe.”

“Kofi Bartels, a broadcast journalist with Nigeria Info 92.3 FM, a radio station in Port
Harcourt, was assaulted on 4 June 2019 by police officers from the Special Anti-
Robbery Squad (SARS). He was then arrested, detained and tortured for attempting to film police while beating a teenager in Port Harcourt.”

“Mary Ekere, a journalist with Akwa Ibom-based The Post newspaper was assaulted by officials of the Akwa Ibom Environmental Protection and Waste Management Agency for filming them beating street traders. They also seized her phone and arrested her”.

“Saifullah Mika’ilu was arrested two years ago over suspicion of posting on Facebook, a picture of Katsina state governor in female dress. Even though he denied posting the picture, SARS police officers detained him for five days. He was tortured during interrogation and forced to confess a crime he did not commit.” Amnesty Report revealed.

Raids and demolition
In the first week of 2019, security forces raided the Abuja and Maiduguri offices of the Daily Trust newspaper, arresting two reporters and confiscating computers and mobile phones.

Over the past two years, two radio stations critical of the government were stopped from broadcasting. The facilities of Breeze FM in Lafiya, Nasarawa state, and Fresh FM in Ibadan, Oyo State, were demolished by state authorities allegedly for their non-
compliance with land administration laws. Both stations were previously harassed by the authorities and were part of a targeted campaign to silence dissenting voices.

“Nigerian authorities pay lip service to the right to freedom of expression and media
freedom by intimidating and harassing journalists and media organizations. This must stop, and the government must respect, protect, promote and fulfil the right of people to share information and end the climate of fear and repression across the country,” said Osai Ojigho.

Nigerian authorities have legally binding obligations to respect, protect, promote and fulfil the rights to freedom of information, freedom of expression, media freedom and
personal liberty of everyone.