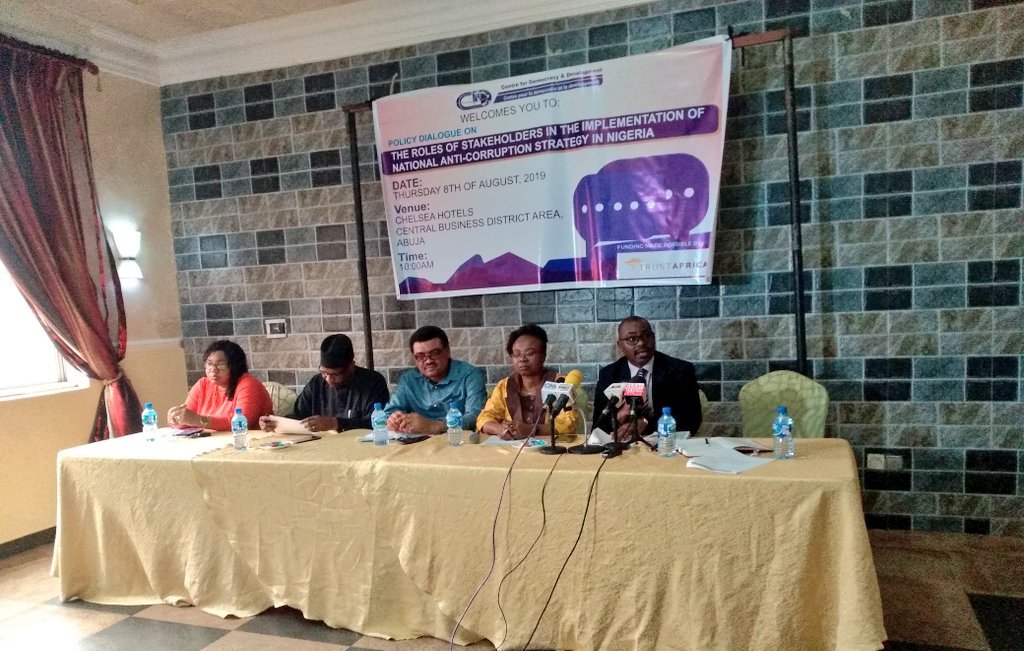 Centre for Democracy and Development (CDD) on Thursday held a one day roundtable with relevant stakeholders in the fight against corruption such as the media, Civil Society Organisations as well as Anti Corruption Agencies toward fast tracking the implementation of National Anti Corruption Strategy (NACS).

According to Emmanuel Uche, Executive Director, ROLAC, who spoke as a panelist at the event said the National Anti Corruption Strategy is a home grown approach to the fight against corruption and all citizens have a role to play.

“Anti Corruption Strategy alone cannot achieve anything in itself if it’s hanged on the shelf. it must be owned and popularised by every citizen including the ministries, Department and Agencies in Nigeria.” he said.

Also speaking at the event, Dayo Olaide of MacAuthur Foundation said building the right synergy between the media, CSOs and the Secretariat of the NACS Monitoring Implementation Committee (TUGAR) in amplifying key findings from the monitoring exercise on the implementation of NACS is quite germane and timely so as to bring all hands on the deck in the fight against corruption in the country.

“The Challenge with corruption in Nigeria is that we externalise corruption as a problem of “them”, there is no personalisation or human face’ he added.

TUGAR, Director, Lilian Ekenayanwun who spoke extensively on the damaging impact of corruption said corruption is an attack on livelihood. Hence we must sensitize citizens’ for active engagement.

“Every Nigerian Citizen is an expert on corruption, one way or another, it is either you are giving it or you are fighting it. There is a demand and supply side to Corruption in Nigeria” she opined.

Several recommendations were made by the experts and participants at the event toward the speedy implementation of NACS hopefully with impactful expected outcomes in no distant time.