#DemocracyDay: CDD celebrates the exemplars of Democracy in Nigeria 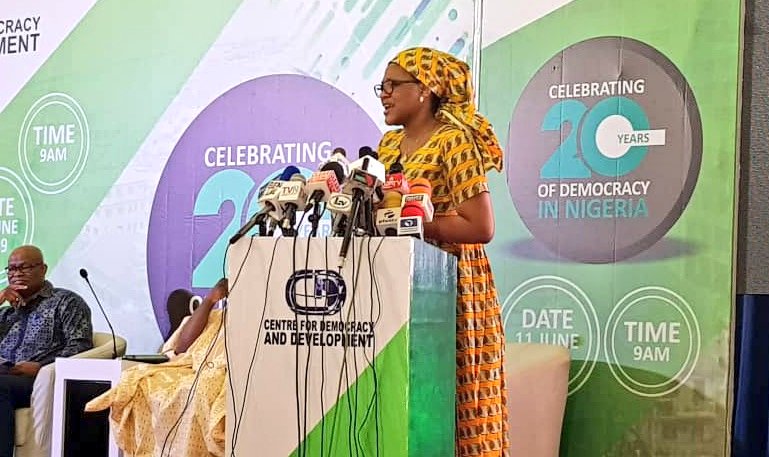 Centre for Democracy and Development (CDD) has deemed it fit to celebrate the ‘never forgotten’ good works of the past and present exemplars of Democracy in Nigeria while celebrating the 20 uninterrupted years of democratisation process in the country.

At the celebration in Abuja on Tuesday, the Executive Director, Hassan Idayat, in her welcome address said it has become imperative to remember those dogged Nigerians who had demonstrated excellent and unequalled commitments toward the survival of Democracy in Nigeria.

“These Nigerians are dogged leaders and freedom fighters who, despite the threats and attacks remained unperturbed, their contributions are indeed worthy of emulation today”.

Idayat added that CDD as an organization which has been committed to promoting the core values of democracy across west Africa, also appreciate the essence of celebrating the survival of an uninterrupted of Democratic governance in the country, in the last 20 years.

“It is a collective decision we have to make as Nigerians to redefine what Nigeria really means to us by putting all political sentiments aside and move this country out of the woods” she remarked.

Speaking at the event as one of the guest speakers, Ekiti State Governor, His Excellency, Dr Kayode Fayemi, paid tribute to two exemplars; Late Abubarka Momoh and Late Tajudeen AbdulRaheem who were forces to reckon with back in the days, in the fight for a Democratic society.

“These two icons of Democracy did not only exemplify true patriotism to their father’s land, also left behind a legacy in the fight for true Democracy at a time when there was no beacon of hope for the nation”.

“The only way we can immortalise those who have died fighting for democratisation process is to continue to build democratic institutions” Fayemi said.

6 thoughts on “#DemocracyDay: CDD celebrates the exemplars of Democracy in Nigeria”