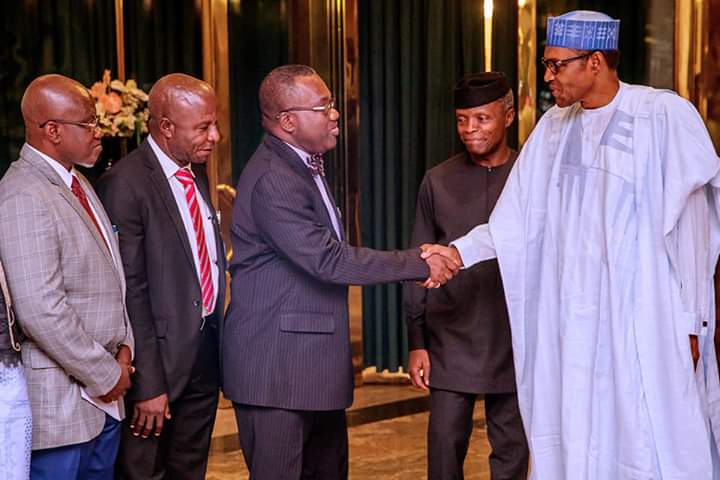 The executive secretary National Human Rights Commission and Chairman Presidential Panel on SARS Reform 2018, Tony Ojukwu ESQ., during the submission of the panel’s report at the Presidential Villa yesterday revealed some of the high points contained in the report of the panel.

The panel’s report recommended thirty-seven (37) Police officers for dismissal from the force, twenty-four (24) were recommended for prosecution. The Panel also recovered two vehicles illegally auctioned by SARS Officers and returned them to their owners.

The National Human Rights Commission is happy to use this opportunity to once again congratulate Your Excellency on your re-election as the President of the Federal Republic of Nigeria at the 2019 presidential polls as well as your successful inauguration for another four–year tenure on 29th May, 2019. We pray that the Almighty Allah provide you with uncommon grace and wisdom to once again successfully steer the wheel of the leadership of our great country for the next four years.

2. Your Excellency may kindly recall your letter Ref. No: SH/OVP/DCOS/NHRC/482 of 14th August, 2018 in which you directed the National Human Rights Commission to constitute a Special Panel to investigate allegations of human rights violations and abuse of office against the Special AntiRobbery Squad (SARS) and the Nigeria Police Force and recommend the reform or restructuring among other appropriate recommendations to improve public safety and security in the country.

3. The Panel was accordingly constituted and comprises representatives of the following institutions including members of the civil society namely:

4. The Panel called for and received 113 complaints on alleged human rights violations from across the country and 22 memoranda on suggestions on how to reform and restructure SARS and the Nigeria Police in general. It sat in the six geopolitical zones of the country to afford complainants and the Police the opportunity to present and defend the allegations.

5. At the end of its public hearing and having listened to complaints as well as defendants and their counsel, the Panel recommended thirty-seven (37) Police officers for dismissal from the force. Twenty four (24) were recommended for prosecution. The panel also directed the Inspector General of Police to unravel the identity of twenty-two (22) officers involved in the violation of the human rights of innocent citizens. The police was directed to pay compensation of various sums in forty-five (45) complaints and tender public apologies in five (5) complaints and directed to obey court orders in five (5) matters. The Police was directed to immediately arrest and prosecute two (2) retired senior Police officer found to have violated the rights of citizens (one for extra-judicial killing and the other for illegal takeover of the property of a suspect). The Panel also recovered two vehicles illegally auctioned by SARS Officers and returned them to their owners

6. Some of the other key recommendations of the Panel include: a. Significant improvement in the funding, kitting and facilities of the Nigeria Police Force; b. Strengthening Information and Communication Technology of the Force; c. Establishment of State and local government Police; d. Institutionalizing a Special Investigation Panel to annually hear and determine complaints on alleged human rights violations against operations of the Nigeria Police Force; e. Strengthening the Police Rapid Response Complaints Unit of the Nigeria Police and other internal complaints mechanisms of the Force to make them more responsive; f. Renaming the Special Anti-Robbery Squad (SARS) to Anti-Robbery Section (ARS) which was its original name and to make the section operate under the intelligence arm of the Police from the divisional, area command, state command, zonal command up to the Force Headquarters level. This will also remove the stigma presently associated with the name SARS; g. Ensuring the ARS limits itself to tackling armed robbery while other intelligence and operational units are strengthened to perform their various special tasks.

8. We have the great pleasure to submit the report to Your Excellency and hope that the federal government will find them useful in its quest to ensure that Nigeria has a responsible, responsive, efficient and effective police institution that will not only decisively deal with criminality but that will be the pride of the Nigerian people.

9. The Commission and members of the Panel are highly appreciative of the opportunity to serve the country in this regard and hope that our modest efforts will help to achieve the next level of His Excellency’s administration especially if the recommendations can be implemented to improve the situation of human rights and compliance of law enforcement agencies with constitutional and international human rights standards. 10. Please accept, Your Excellency the assurances of our highest esteem and warmest regards.