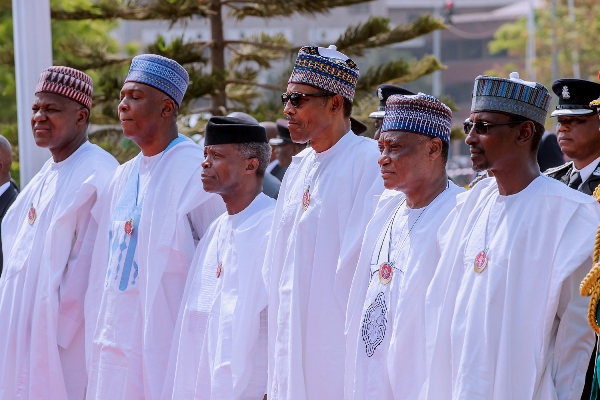 In commemoration of the day set aside for the past Nigerian fallen Heroes which was yesterday, January 15th, President Buhari in company of the Vice President and other eminent Nigerians as well as top military officers in the Army, Navy, Air force laid wreath in remembrance of these Nigerian heroes at the National Memorial Acade Abuja.

This was followed by the bigel of the last post a unique but symbolic aspect of the ceremony that reminds veterans of their departed colleagues, and the families of fallen Heroes who had paid the supreme sacrifice.

It was reported that after the one-minute silence for the fallen heroes, President Buhari and Vice-President Osinbajo laid wreaths at the tomb of the unknown soldiers.

The Senate President, and Speaker of the House of Representatives, laid the wreath at the same time, followed by the Chief Justice of Nigeria Justice Walter Ononghen.

The Representative of Widows of the fallen Heroes, Mrs Samira Abu Ali, with emotions written on her face, laid the wreath at the tomb of the unknown soldiers.

President Buhari later signed the Anniversary register after which he was supported by the other dignitaries to release some white pigeons to signify peace in the land.