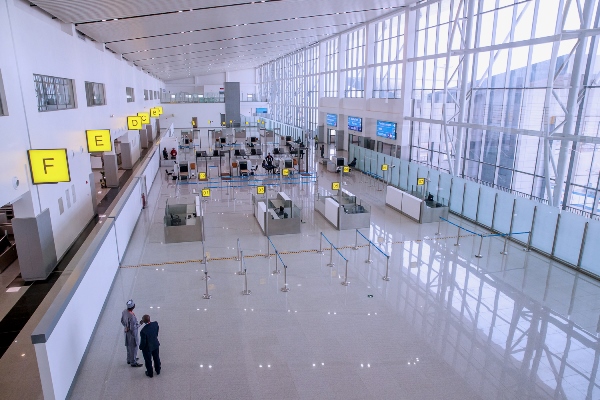 The new terminal at the Nnamdi Azikiwe International Airport, Abuja, is now being used, with Asky Airlines leading the way.

Asky Airlines’ B737-700 aircraft with flight number ET-AVP, which landed at the airport at 3:30 p.m from Lome in Togo, had 91 persons on board comprising 85 passengers and six crew members.

Dunoma said he expected other international airlines to move into the new terminal as soon as possible, saying it was a great departure from what was obtainable at the old terminal in terms of equipment and passenger facilitation.

According to him, other airlines have to key in because “you cannot compare this terminal and the old one because if you are looking for safety, passenger facilitation and comfort, this is the place”.

Mr Sani Mahmud, Regional General Manager, North Central, FAAN/Airport Manager, NAIA, said the maiden operation was hitch-free with the successful processing of 91 passengers on board Asky Airlines from Lome, Togo and the departing passengers to Ndjamena on the same flight.

Mahmud assured that all the facilities in the terminal had been tested and certified perfect to handle all international flights, adding that the commencement of operation by Asky was a confirmation.

According to him, WiFi is available and trolleys are also available for free in the terminal.

“We thank God for making it possible that today, we were able to commence flight operations in the new terminal of the NAIA that was commissioned on Dec. 20, 2018 by President Muhammadu Buhari.

“We sincerely appreciate all the stakeholders that made this possible and as you can see, all the agencies are on ground for international operations.

“We want to assure Nigerians and the world that this terminal will be maintained beautifully because we have a very good strong team in this airport.

“This is the same team that certified this airport in 2017, won the best improved airport in safety this year and also won the airport manager of the year back to back in 2017 and 2018,” he said.

A passenger, who is a Chadian and married to a Nigerian, Mrs Patricia Monomon, said she was experiencing the best flight experience in Nigeria for the first time.

Monomon said the terminal could be described as one the best anywhere in the world, saying it was a great achievement in the air transport sector.

She urged the government and the airport management to ensure that the facility was properly maintained to retain the standard, adding that the major problem in Africa was maintenance.

“The last time I travelled through this airport was like a nightmare but I can’t imagine the experience of today in this same airport because this time around it is really fantastic.

“If you meet such facility at the airport on your arrival, you will feel relaxed,” she added.

Also Isidore Nwoko, a Nigerian technician based in Ndjamena, said he was delighted to see such an airport terminal in the country, saying he was angry that Nigeria could not afford to have a world class airport before now.

According to him, he can be proud anywhere in the world that Nigeria now has a beautiful airport.

“As it is now, it is good and I am urging the government to ensure that this airport is maintained and kept clean as it is today,” he said.

King Wang, Director/Chief Correspondent, China Radio International, Abuja Bureau, said that Nigeria, being the most populous nation and number one economy in Africa, deserved nothing less than the new facility.

Wang said there was need for the country to improve on efficiency in its air transport sector for more comfort and safety for passengers.

The News Agency of Nigeria (NAN), reports that the terminal, which was inaugurated by President Buhari on Dec. 20, is one of the four international terminals being constructed by the China Civil Engineering and Construction Corporation (CCECC). Others are in Lagos, Kano and Port Harcourt.