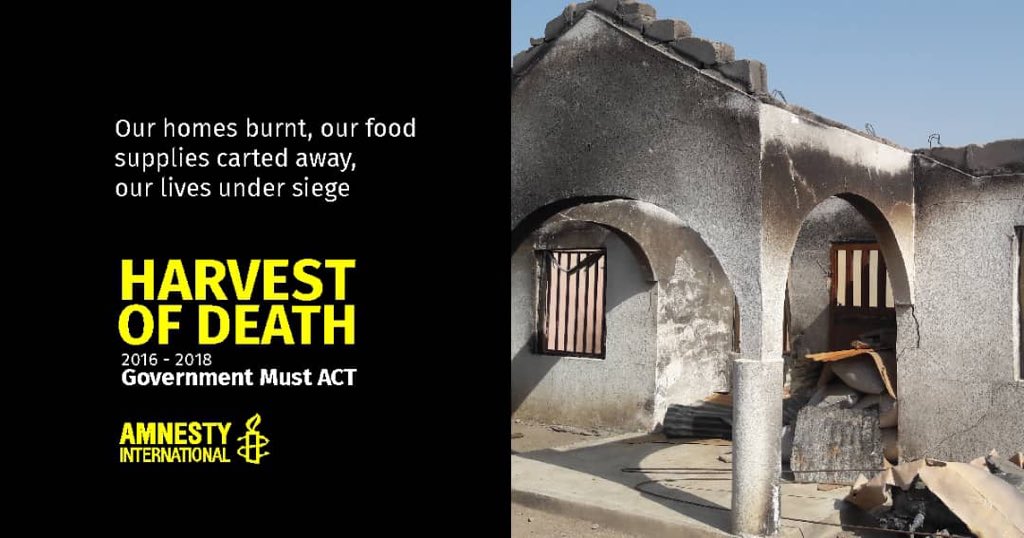 –Failure of security forces allows some attacks to last for days.

The Nigerian authorities’ failure to investigate communal clashes and bring perpetrators to justice has fuelled a bloody escalation in the conflict between farmers and herders across the country, resulting in at least 3,641 deaths in the past three years and the displacement of thousands more, Amnesty International revealed today.

In a new report, “Harvest of Death: Three Years of Bloody Clashes Between Farmers and Herders”, Amnesty International found that 57 per cent of the 3,641 recorded deaths occurred in 2018. Security forces were often positioned close to the attacks, which lasted hours and sometimes days, yet were slow to act. In some cases, security forces had prior warning of an imminent raid but did nothing to stop or prevent the killings, looting and burning of homes.

“The Nigerian government has displayed what can only be described as gross incompetence and has failed in its duty to protect the lives of its population and end the intensifying conflict between herders and farmers. The authorities’ lethargy has allowed impunity to flourish and the killings to spread to many parts of the country, inflicting greater suffering on communities who already live in constant fear of the next attack,” said Osai Ojigho, Director of Amnesty International Nigeria.

“Our research shows that these attacks were well planned and coordinated, with the use of weapons like machine guns and AK-47 rifles. Yet, little has been done by the authorities in terms of prevention, arrests and prosecutions, even when information about the suspected perpetrators was available.”

Villagers in all the areas visited by Amnesty International described losing everything as their homes were burned and their food supplies carted away by attackers. Since 2016, both sides in the conflict have increasingly sought to destroy each other’s livelihood with herders setting fire to farms and farmers engaging in cattle rustling.

“The root cause of this conflict has nothing to do with religion or ethnicity; it is largely about land and access to grazing. But in some places, because of the failures of the security forces, competition over resources is used as a pretext to kill and maim along ethnic or religious lines. The conflict has also been dangerously politicized by some state government officials who have inflamed tensions by embarking on a blame game along political party lines,” said Osai Ojigho.

At least 310 attacks were recorded between 5 January 2016 and 5 October 2018. The attacks were most frequent in Adamawa, Benue, Kaduna, Taraba and Plateau. Other parts of the country including Enugu, Ondo, Oyo, Delta and Edo also recorded attacks.

Amnesty International researchers uncovered a pattern of appalling killings by both farmers and herders across Adamawa, Benue, Taraba, Kaduna and Plateau.

On 17 June 2017 one of the deadliest attacks on Fulani communities in Taraba state began. It lasted four days with dozens of dead bodies found in the bush afterwards.

An eyewitness told Amnesty International: “My wife was slaughtered, they opened her stomach and brought out the baby and slaughtered it. My kids were slaughtered also. I was with their dead bodies for three days in the bush before the soldiers came. My father was burned in front of the mosque where he prayed. They killed him there and burned him.”

In the Guma and Logo local government areas of Benue state, villages began 2018 under attack by armed gangs, who arrived in the early hours of 1 January. The attack, which went on for 11 days, resulted in at least 88 deaths, although the state government was only able to bury 73 bodies.

An eyewitness told Amnesty International: “Up to 120 people (were) dead, some are farmers in the bush but we have not recovered them. It was through the efforts of the Benue State government and security agents that 73 bodies were recovered and buried. More corpses are still out there while some have been buried already in the villages.”

Amnesty International interviewed 21 women in communities affected by the attacks. Many spoke of losing their husbands and having to take care of their children alone. On 20 February 2017, Zilian village in Kaduna state was attacked. One woman described how she ran and hid in an old latrine pit. Her husband was killed in the attack and her 6-year old daughter was severely burnt. She said:

“When they left, I dragged myself out of the pit and went home. My thoughts were that my kids were already burned to death in the house but I needed to confirm. When I got home, everywhere was under fire. They burned the house and everything was on fire and still burning. I saw my husband’s corpse on the floor and fire had caught his leg, so I moved him from the fire.”

In Kaduna and Zamfara states, what started as clashes between herders and farmers has turned into a total collapse of law and order, with armed gangs raiding villages, kidnapping people for ransom and killing hundreds of people in recent years.Villagers told Amnesty International that they were regularly confronted by attackers wielding machine guns and assault rifles.

Amnesty International took photographs of different ammunition casings from the scenes of attacks in Adamawa, Kaduna and Benue states, and received photographs of other casings from Plateau state. In all cases, weapons analysis showed that the attackers were likely to have been armed with machine guns like the PKM and G3, and AK-47 rifles.

“The Nigerian authorities have an obligation to protect the right to life as enshrined in international and African human rights treaties. Yet, communities told Amnesty International that they alerted the security forces to impending attacks and no action was taken.

On 2 May 2018, 33 villagers were killed and five villages torched in the Numan local government area of Adamawa state, despite security forces being informed 16 hours prior to the attack that gunmen had started gathering nearby. Villagers and a local government official phoned through the warnings from 11pm on 1 May, the night before the attack.

According to research undertaken on the ground by Amnesty International, soldiers were deployed to perform a single patrol in the area on the afternoon of 2 May, and then withdrew shortly before the attackers arrived. Villagers kept calling and complaining about the withdrawal, but the relevant Major’s phone was reported to be switched off.

Villagers in Agwada, Udege, Kokona local government area and Loko development area in Nasarawa state wrote to the Inspector General of Police on 10 March 2017 to protest against “incessant” attacks by herders. The villagers told Amnesty International that the police asked them for N150,000 ($411) for “logistics”, which was paid. Just three police officers were sent but they refused to go to the villages, complaining of bad roads.

Amnesty International shared its findings with government authorities and requested information from the Ministry of Justice, Nigerian Army, Nigeria Police Force and the governments of Adamawa, Benue, Enugu, Kaduna, Plateau and Taraba states. Only Enugu state government responded to our request, saying five people are being prosecuted over the killing of 12 people in Nimbo community in Uzo-Uwani local government area, which was attacked on 25 April 2016.

“Authorities must investigate the slow response time of security forces that has resulted in shockingly high casualties. As part of this process, the security forces’ leadership should scrutinize the role of individual commanders, while governments across the affected states must provide appropriate compensation to the victims of the conflicts,” said Osai Ojigho.

“The Nigerian authorities must immediately initiate independent, effective and impartial investigations into all human rights violations and abuses perpetrated during the farmers-herders conflicts, whether by state or non-state actors. The findings of these investigations must be made public, and where there is sufficient admissible evidence, those responsible must face prosecution in fair trials.”