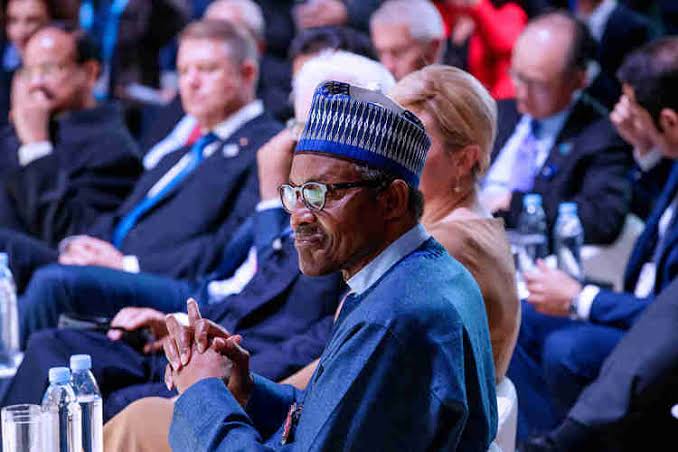 PRESIDENT Muhammadu Buhari yesterday said the sanctions of jail terms for illicit financial flow was no longer sufficient to fight the menace.

President Buhari who stated this while delivering a speech on “Illicit Financial Flows (IFFs) and Corruption: The Challenge of Global Governance” at the Peace Forum, in Paris, France, said stringent actions should be taken against perpetrators of illicit financial flows.

He also said that such stringent action should include crackdown on safe heavens and return of stolen assets to countries of origin.

The Forum attended by over 70 world leaders was organised by the French Government and a number of Non-Governmental Organisations (NGOs).

The Nigeria leader opined that it was based on the simple idea that international cooperation was key to tackling global challenges and ensuring durable peace.

Buhari warned that continuous impunity would encourage more pilfering of countries’ resources to the detriment of poor and vulnerable populace.

Nigeria, he said, had strengthened its laws and institutions to fight corruption, fast-track recovery of stolen assets and punish offenders.

He called for more commitment from governments and international organizations.

He said illicit financial flows posed a risk to the realisation of the Sustainable Development Goals (SDGs) as many countries grapple with the challenge of gathering resources to improve their Human Development Index, while a few privileged individuals continue to explore the weaknesses in financial systems.

According to him, “Our experience in Nigeria is that financial crimes, such as corruption and fraudulent activities, generate enormous unlawful profits which often prove so lucrative that the threat of a jail term is not sufficient to deter perpetrators.

“A more powerful deterrent is to ensure that profits and assets generated from illicit financial flows and corruption are recovered and returned to countries of origin. This is not to under-estimate the value of strong institutions. It only indicates that asset recovery represents significant deterrence compared to the traditional focus on obtaining conviction by the law enforcement agencies of the countries of origin.

“As we take stock of the strengths and weaknesses of domestic, regional and international mechanisms against Illicit Financial Flows, I seize this opportunity to recall the Global Declaration Against Corruption made in London in 2016 and our commitment thereto.

“Among other things, the Declaration encapsulates our collective commitment to the principles of Open Government Partnership, especially the National Action Plans to actualize beneficial ownership transparency, enhance the capacity of Financial Intelligence Units (FIUs), reinforce Independent Reporting Mechanisms and support the activities of the Global Forum on Transparency and Exchange of Information for Tax Purposes. We should remain resolute in our commitment to the aforementioned goals.

“Similarly, we must crack down on safe havens for corrupt assets. I also advocate sanctions by professional bodies against transactional middlemen (lawyers, bankers, brokers, public officials, etc.) who facilitate Illicit Financial Flows.”I would like to reiterate that the Government of Nigeria remains open and is ever willing to continue to identify and share experiences and strategies to give life to the ideas that will lead to winning the fight against corruption.”

He urged the world leaders and global institutions to remain resolute on the Global Declaration Against Corruption made in London in 2016, which encapsulates the collective commitment to the principles of Open Government Partnership, especially the National Action Plans to actualize beneficial ownership transparency and enhance the capacity of Financial Intelligence Units (FIUs).

Buhari also called for reinforcement of the Independent Reporting Mechanisms and support for the activities of the Global Forum on Transparency and Exchange of Information for Tax Purposes.

He said: “As we take stock of the strengths and weaknesses of domestic, regional and international mechanisms against Illicit Financial Flows, I seize this opportunity to recall the Global Declaration Against Corruption made in London in 2016 and our commitment thereto.”

Buhari noted that tremendous progress has been achieved through the enactment of global instruments, adding that some fundamental technical issues have remained unresolved.

“These revolve around the formulation of policy and regulatory frameworks that cut across different jurisdictions. We must not lose sight of the role played by secret companies, banks and law firms, all too often based in developed economies and their related offshore centres.

“Recent studies reveal that flaws in the global financial system enable corrupt individuals to hide details of their financial dealings under the noses of governments and law enforcement agencies.

“This underscores the need to urgently address the issue of Mutual Legal Assistance, as well as continental legal frameworks, in the context of safe havens for illicit transfers,” he said.

The Whistle-Blowing policy in Nigeria, he said, has facilitated recovery of billions of naira from corrupt persons, which had been redirected to the development of critical infrastructure and programmes that will benefit all Nigerians and realisation of the SDGs.