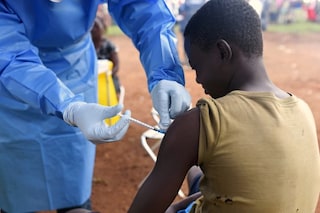 US Centers for Disease Control and Prevention Director Robert Redfield said Friday that the Ebola outbreak in conflict-ridden Congo has become so serious that international public health experts need to consider the possibility that it cannot be brought under control and instead will become entrenched.

If that happened, it would be the first time since the deadly viral disease was first identified in 1976 that an Ebola outbreak led to the persistent presence of the disease. In all previous outbreaks, most of which took place in remote areas, the disease was contained before it spread widely. The current outbreak is entering its fourth month, with nearly 300 cases, including 186 deaths.

If Ebola becomes endemic in substantial areas of North Kivu province, in northeastern Congo, “this will mean that we’ve lost the ability to trace contacts, stop transmission chains and contain the outbreak,” said Tom Inglesby, director of the Johns Hopkins Center for Health Security, which hosted the briefing on Capitol Hill that featured the Ebola discussion with Redfield.

In that scenario, there would be a sustained and unpredictable spread of the deadly virus, with major implications for travel and trade, he said, noting that there are 6 million people in North Kivu. By comparison, the entire population of Liberia, one of the hardest-hit countries during the West Africa Ebola epidemic of 2014-2016, is about 4.8 million.

The outbreak is taking place in a part of Congo that is an active war zone. Dozens of armed militias operate in the area, attacking government outposts and civilians, complicating the work of Ebola response teams and putting their security at risk. Violence has escalated in recent weeks, severely hampering the response. The daily rate of new Ebola cases more than doubled in early October. In addition, there is community resistance and deep mistrust of the government.

Some sick people have refused to go to treatment centers, health-care workers are still being infected, and some people are dying of Ebola or spreading the virus to new areas. An estimated 60 to 80 percent of new confirmed cases have no known epidemiological link to prior cases, making it very difficult for responders to track cases and stop transmission. In late August, the United States withdrew some of the CDC’s most seasoned Ebola experts who had been stationed in Beni, the province’s urban epicenter, because of security risks.

“I do think this is one of the challenges we’ll have to see, whether we’re able to contain, control and end the current outbreak with the current security situation, or do we move into the idea that this becomes more of an endemic Ebola outbreak in this region, which we’ve never really confronted,” Redfield said.

If that happens, health-care responders may need to consider vaccinating broader populations instead of the current strategy of vaccinating those who have been in contact with infected people.

When contact tracing begins to fall apart, “then you are entering another phase and losing the hope that you can arrest the outbreak through standard interventions,” J. Stephen Morrison, senior vice president at the Center for Strategic and International Studies, said in an interview. In a new report, Morrison wrote that there is an urgent need for “high-level political attention focused on generating an updated game plan” to improve security, train and deploy community health workers, and win community trust.

“This is going to be a complicated and deeply problematic situation and we need to prepare ourselves for dealing with this long term,” Morrison said.

Redfield, officials from the World Health Organization and other experts say one of the biggest worries is the spread within Congo to places like Butembo, a major trading port and urban area, where the risk of widespread transmission escalates dramatically.

In mid-October, the World Health Organization said that it was “deeply concerned” by the outbreak but that the situation did not yet warrant being declared a global emergency. The U.N. health agency called for response activities to be “intensified.” The WHO’s director general, Tedros Adhanom Ghebreyesus, and a top U.N. official for peacekeeping operations, are in Congo this week to take stock of the response.