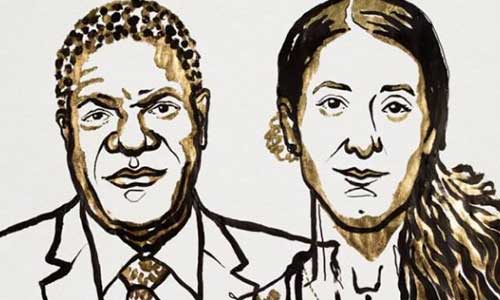 Nadia Murad, a rape survivor, who raised awareness about the abuses on 3,000 Yazidi women by the ISIS army, has won the 2018 Nobel Peace Prize.

She was awarded for showing “uncommon courage in recounting her own sufferings and speaking up on behalf of other victims”.

Murad was awarded alongside Denis Mukwege, a Congolese gynecologist, who has spent most of his professional years helping victims of sexual violence in the Democratic Republic of Congo.

According to the Norwegian Nobel Committee, the duo was awarded “for their efforts to end the use of sexual violence as a weapon of war and armed conflict”.

“Both laureates have made a crucial contribution to focusing attention on, and combating, such war crimes. Denis Mukwege is the helper who has devoted his life to defending these victims,” the committee said.

“Nadia Murad is the witness who tells of the abuses perpetrated against herself and others. Each of them in their own way has helped to give greater visibility to war-time sexual violence, so that the perpetrators can be held accountable for their actions.

“Nadia Murad is one of an estimated 3,000 Yazidi girls and women who were victims of rape and other abuses by the IS army. The abuses were systematic and part of a military strategy. They served as a weapon in the fight against Yazidis and other religious minorities.”

Speaking of Mukwege, the committee said he “has spent large parts of his adult life helping the victims of sexual violence in the Democratic Republic of Congo”.

“Since the Panzi Hospital was established in Bukavu in 2008, Dr. Mukwege and his staff have treated thousands of patients who have fallen victim to such assaults. Most of the abuses have been committed in the context of a long-lasting civil war that has cost the lives of more than six million Congolese.”

The 25-year-old Iraqi woman is the second youngest person to have won the Nobel Peace Prize, only behind Malala Yousafzai, who won the prize in 2014, at the age of 17.

Mukwege is the first Congolese to win a Nobel prize, and the eight African to win the 113-year-old prize for peace.