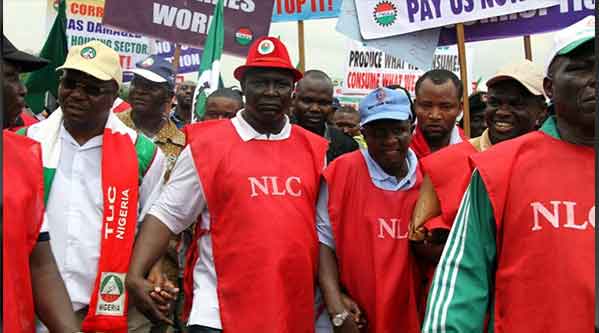 The Nigeria Labour Congress has suspended its ongoing nationwide strike following promises by the Federal Government to reconvene the tripartite committee on national minimum wage on October 4.

The suspension of the warning strike takes effect from today 30th September.

Announcing the decision in Abuja on Sunday, the NLC President, Ayuba Wabba, stated that the labour action was suspended to enable the tripartite committee to hold its crucial meeting and conclude its work.

The organised labour had embarked on the strike after a 14-day ultimatum to the Federal Government for failing to come out with its own figure on the new minimum wage.

The three labour unions had demanded N65,500 as new minimum wage for workers, while the private employers and some state governors were proposing N25,000.

President of the NLC Ayuba Wabba said at a world news conference in Abuja on Sunday that the strike was suspended after the government agreed to reconvene the tripartite committee’s meeting on the new minimum wage.

Wabba said the meeting, scheduled to reconvene on Oct. 4, would enable the committee to conclude work on the minimum wage after the Federal Government must have given a figure on what it could afford for workers.

“Indeed on Thursday morning, the strike action commenced and was observed across the country.

“We similarly commend the members of the press for their vigorous and comprehensive reportage of the strike; we thank all Nigerians for their support.

“We have received a firm and formal invitation to a reconvened meeting of the tripartite committee scheduled for Oct. 4 and Oct. 5, 2018.

“We demand that this shall be the final session of the committee and that a final report will be submitted to Mr President immediately.

“In order to avail the committee the necessary conducive environment to hold this crucial meeting and conclude its work, organised labour has after obtaining the mandate of their necessary organs, decided to suspend the strike with effect from today, Sunday Sept. 30, 2018,” Wabba said.

He urged all unions and state councils to maintain a high level of mobilisation and readiness until the struggle for a reasonable minimum wage was achieved.