“Imo people should expect fairness, equity, absolute regard for the rule of law in my tenure” – Sir George Ezenna Eche 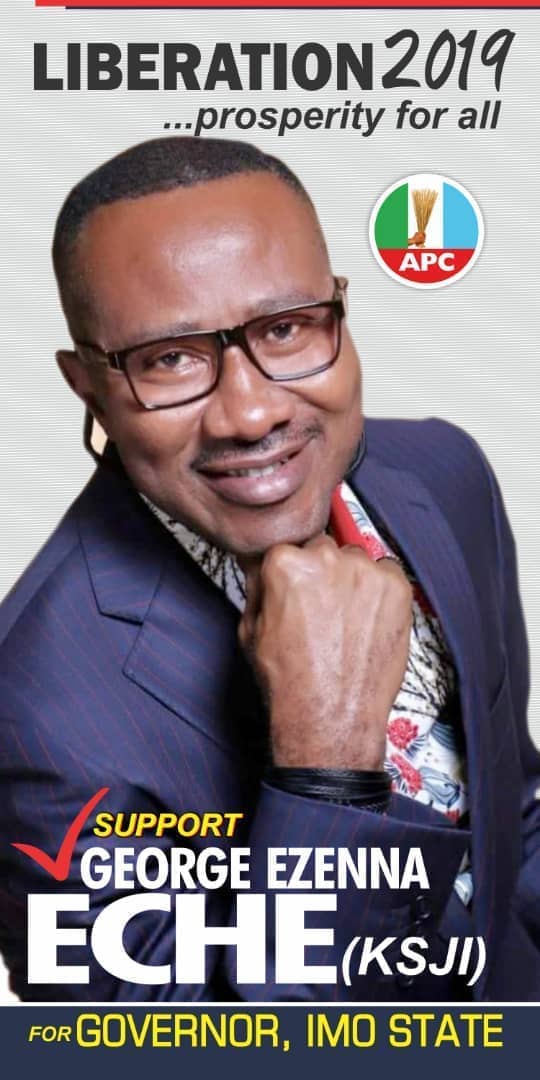 Imo State Gubernatorial Candidate under the Rulling Party, All Progressive Congress (APC), Sir George Ezenna Eche has reiterated his promises and commitments to due process, equity, fairness and absolute regard for the rule of law when he becomes the next Governor of the State.

The Immediate past Secretary to the Imo State Government shared with our correspondents some of his lofty visions for the state while in Abuja on Wednesday for the final submission of his Nomination Form for the Primary Elections slated for September 2018.

In this brief interview, Sir George E. Eche bore his mind on how he would prioritize continuity in the area of provision of sustainable critical infrastructures, education and civil service reforms among others transformation agenda for the state so as to move the state from the current level to become the Next hub of economic activities in Africa.

Read the interview below:

May we meet you sir?

Now that you have submitted your Nomination Form, what should the people of Imo State expect from you, before elections and after the elections?

They should expect from me a well coordinated Campaign that is predicated on fairness, on the rule of law, what the party says we should do within the Constitution of the Federal Republic of Nigeria. They should expect from me, explaining exactly who I am and why I have come out, standing alone, not in comparison or trying to compete with anybody else. They should also expect to see somebody who is desirous of lifting Imo state from where it is right now. Even though the present administration has done well but it needs to get better.

What would you like to do differently from the current Administration in Imo State?

We need to first of all start from where they have stopped, improve on our free education, I like the free education but we need make it more functional and a little bit more organized. We need to improve on our Civil Service. That’s where had been for many years. Improve on the public sector generally. We need to improve on our pension systems. I am looking forward to when a pensioner gets paid without having to come down to Owerri or anywhere else. We need to ensure that teachers within the public sector are trained and re-trained, you know when you have worked in an office for three years and nothing new has come into your knowledge it may mean that there is something wrong. There is need to also improve on our infrastructures. I am looking forward to doing some Independent Power Project (IPP) projects that would give us more light. No economy can develop properly without steady and constant power supply. In Owerri, as I speak to you, power supply is totally epileptic. It is so bad that if you have power up to two hours in a day, in fact you would be happy. That is totally abnormal. So through this IPP project, we intend to use things that we can do by ourselves such as Solar Energy. We intend to improve on our transportation system by introducing “Trams” – a rail system of transportation within the metropolis. We intend to improve on our land tenure system and Land . Land is a resource that is not increasing, you must use what you have to your advantage. We intend to introduce “Gated Cities” – Talking about people living in an area that is a city in itself, properly gated.  A properly maintained and serviced cities, where people know their neighbours, and strangers and intruders are easily identified and fished out. we intend to do a lot of things that are totally novel while we improve on the ones are already existing.

When you eventually become the Governor, what will you like to be remembered for after four years in the Office?

Thank you for your time sir

It is my pleasure. 90 thought on ““Imo people should expect fairness, equity, absolute regard for the rule of law in my tenure” – Sir George Ezenna Eche”