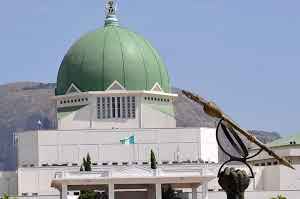 Leadership and management of National Assembly are now neck deep in internal showdown with their aides who have sworn to shut down the complex over unpaid allowances and entitlements due them, which runs into over N2.5billion.

The National Assembly Legislative Aides Forum, NASSLAF, it was gathered, has already written to the Senate president, Bukola Saraki, and speaker of the House of Representatives, Yakubu Dogara, to intimate them of their grievances.

They blamed the management, led by the clerk to the National Assembly, Sani Omolori, for their predicament, alleging that he deliberately refused to pay them.
In their letter, the body said they would shut down the complex over unpaid allowances and poor welfare since June 2015.

Part of their grievances is the long time agitation for training, allowances, and the fear that they would be paid incomplete severance entitlements as the eighth session of the National Assembly grinds to a halt.

According to insiders, the legislative aides at both chambers are worried that if their statutory Duty Tour Allowance, DTA, had been held all the while, no one knows whether a full/complete severance allowance would be paid to them after the tenure of their principals.
Investigation revealed that since they were engaged in 2015, only three months allowance has been paid, raising the suspicion that the decision to withhold the balance (2015-2019) by management could be deliberate as the eighth Assembly would soon come to an end.

“If our allowances are not paid, what is our hope that our severance would also be paid: We were told by the legislative aides of the seventh Assembly that their own severance was not fully paid and we do not want to be victims, so we call on relevant authorities to look into our plight and hardship.

We will reject it, if our severance entitlements are not paid in full as stipulated in the rules,” they demanded in the letter.

Meanwhile, reports indicate that some legislative aides have been bedridden without funds to seek medical care, while others have also died due to unavailability of funds for treatment.

Efforts to reach the director of Information, Mr Rawlings Agada, for comments on the subject matter were unsuccessful.