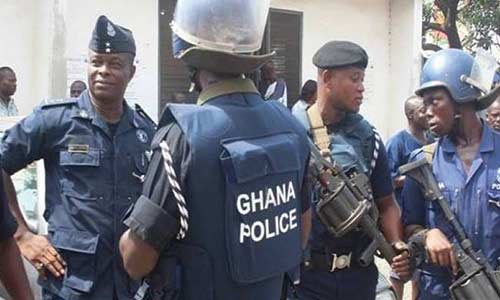 The Inter-Governmental Task Force constituted by the Government of Ghana to regulate retail trade has arrested and detained 37 Nigerian traders.

Also, about ten shops have been locked up at the Tip Toe Lane at the Kwame Nkrumah Circle by the Task Force since it began the latest round of inspection of shops last week.

The affected shop owners failed to regularize their business concerns as prescribed by the local law, while those detained didn’t have the necessary documents such as passport, resident permit and work permit, the authorities said.

What was originally termed a routine inspection of business premises owned by non-Ghanaians to determine whether they were up to date in the payment of taxes culminated in another round of clamp down on shops owned by Nigerians.

An executive of the Ghana Union of Traders said the exercise was confined to non-Ghanaian traders. It was basically to scrutinize their records to ensure that they had complied with all the necessary procedures for operating foreign owned businesses in the country. It wasn’t intended to harass a particular class of foreigners operating businesses in the area.

A visit to some of the shops partly confirmed what the GUTA executive said. A young man who introduced himself as Chienedu disclosed that the Task Force members requested to see the shop’s validating documents and sales book. He showed a receipt, detailing items that the Task Force members have taken away for testing. He also said he was instructed to tell the boss to report to the committee or the shop would be shut.

In another shop, some people were taken away by the Task Force. Two of them didn’t have passports. The wife of the shop-owner, who had a valid passport and a resident permit, was also picked up. Her offence was that she was helping in the shop without a valid work permit.

Further checks revealed that more persons were being picked up for similar offences. Even those who owned passports, but couldn’t produce them at that material time were not left off the hook. In some shops they requested to see the shop owners’ personal laptops.

A Nigerian trader had confronted some members of the Task Force over the clamp-down on shops owned by his compatriots. They refuted it, alleging that the traders decided to lock up after sighting them. But several other persons attested to the fact that the Task Force members actually put the shops under lock and key.

The Secretary-General of the Nigerian Union of Traders Association of Ghana, Comrade Everistus Nwankwo, who was piqued by the entire exercise, said it was inconsistent with the assurances the Government of Ghana had given that Nigerians wouldn’t be affected by the eviction notice given to non-Ghanaians to leave their markets.

“They have not entered into any shop owned by any foreigner from the ECOWAS extraction. I have not seen any Nigerien or Senegalese or Togolese that they have entered their shops. It is only Nigerians. So without much persuasion, I can say that their exercise is targeted at Nigerians,” he said.

The NUTAG spokesman also picked holes with the submission that the inspection was motivated by the need to guarantee the quality of goods peddled by Nigerian traders.

By Thursday, the situation grew worse, as more shops were closed and more people were picked up and detained at the Immigration headquarters in Accra. By the close of work on Friday, the alleged offenders were still in confinement. The Nigerian Mission in Accra and NUTAG has been working relentlessly to secure their release.