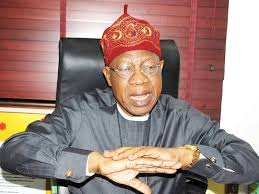 The Nigerian Minister of Information and Culture, Alhaji Lai Mohammed has blamed the recent problem in the National Assembly on fake news, particularly on social media.

Lai Mohammed disclosed this during his courtesy visit to the headquarters of Blue Print Newspaper in Abuja.

The federal government launched a campaign against fake news on July 11, 2018.

He said, “When we launched the campaign, we did not envisage the kind of event that occurred at the National Assembly last week, specifically August 7, less than one month after the launch.

“That event, during which the National Assembly was barricaded, is a classic example of how fake news can aggravate conflicts. In fact, it was driven all the way by fake news.

The Minister commended the Acting President, Prof. Yemi Osinbajo who intervened in the crisis which he said could have brought great problem on the problem.

Mohammed cited the alleged uncovering of N21 billion and thousands of PVC and assorted weapon at the private residence of the sacked DSS boss, Lawal Daura as one of the ways fake news was affecting the country.