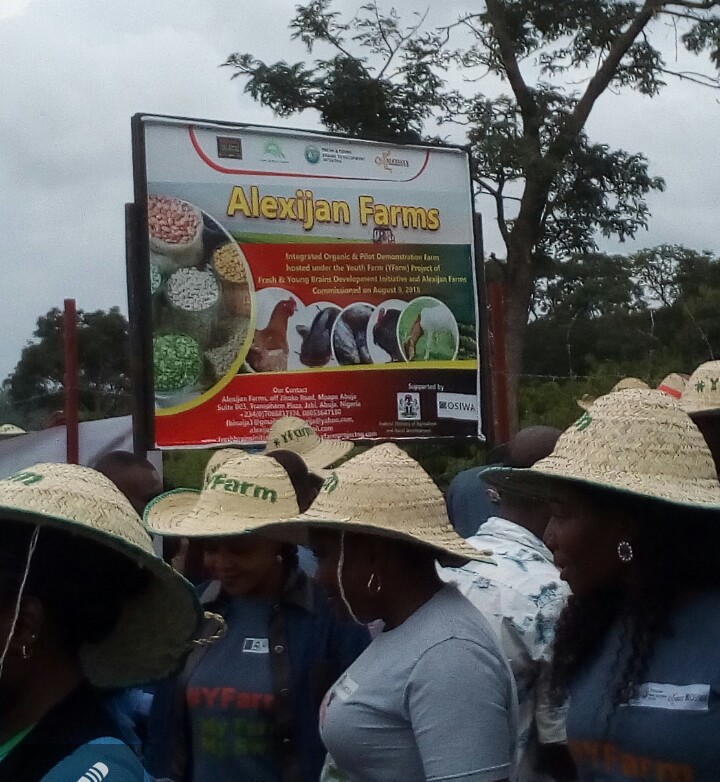 The founder and CEO, Alexijan Consults and Fresh and Young Brains Developement Initiative, Nkiru Nnaemego has stated that more than 46 young Nigerians including persons living with disabilities have benefitted from the Second Phase of the Youth Farm (#YFarm) Project which her orgainisation launched the first phase in 2014 with more than hundred youth participation and beneficiaries selected across the six geopolitical zones

Nkiru made this disclosure today at the closing Ceremony of the Youth Farm Bootcamp and Grand Opening of Alexijan Farms as an Official Farm for #YFarm Project Initiative in Abuja.

In her opening remarks, she added that the Second Phase of the Youth Farm project is a lesson learnt from the first Phase.

Nnaemego recounted in details several unforeseeable challenges encountered during the first phase of the #YFarm project in which they lost virtually all the farm produce including all the fishes in the ponds as a result of the effects of climate change.

“All the fishes in our ponds were all washed off, we lost everything”.

“And because we are young people we didn’t put into consideration the aspect of insurance” she remarked.

She however expressed her gratitude to

most importantly Open Society Initiative for West Africa (OSIWA) for the supporting and believing in the Initiative which birthed the Second Phase of the project.

“Through collaboration with OSIWA we were able to bounce back and draw some lessons from the First Phase of the project”. she affirmed.

Agriculture, so that other young agroprenuers hoping to venture into large scale farming and agriculture can learn from our past experiences” she said.

Dooshima, one of the participants from Benue State, Nigeria who was privileged to speak at the event, said that she has been imparted in the last four days of the Bootcamp and she would be going back to her state to put all she had learnt to practice.

Dooshima, who according to her has been orphaned since childhood, expressed her gratitude to the Barrister Nkiru for her brilliant leadership of wonderful initiative such as #YFarm which encourages and empowers young people to invest more in Agriculture rather than hoping and waiting for white collar jobs that may never come after graduation, thereby taking them out of poverty.

“We have been imparted through several sessions such as personal development and marketing skills. We cannot thank her enough.” said Dooshima

The 2018 #YFarm Bootcamp was concluded today 9th August, with close to 50 young participants presented with their certificates, prizes and benefits.

1,215 thought on ““More than 46 young Nigerians have been empowered from the Second Phase of #YFarm Project” – Nkiru Nnaemego”