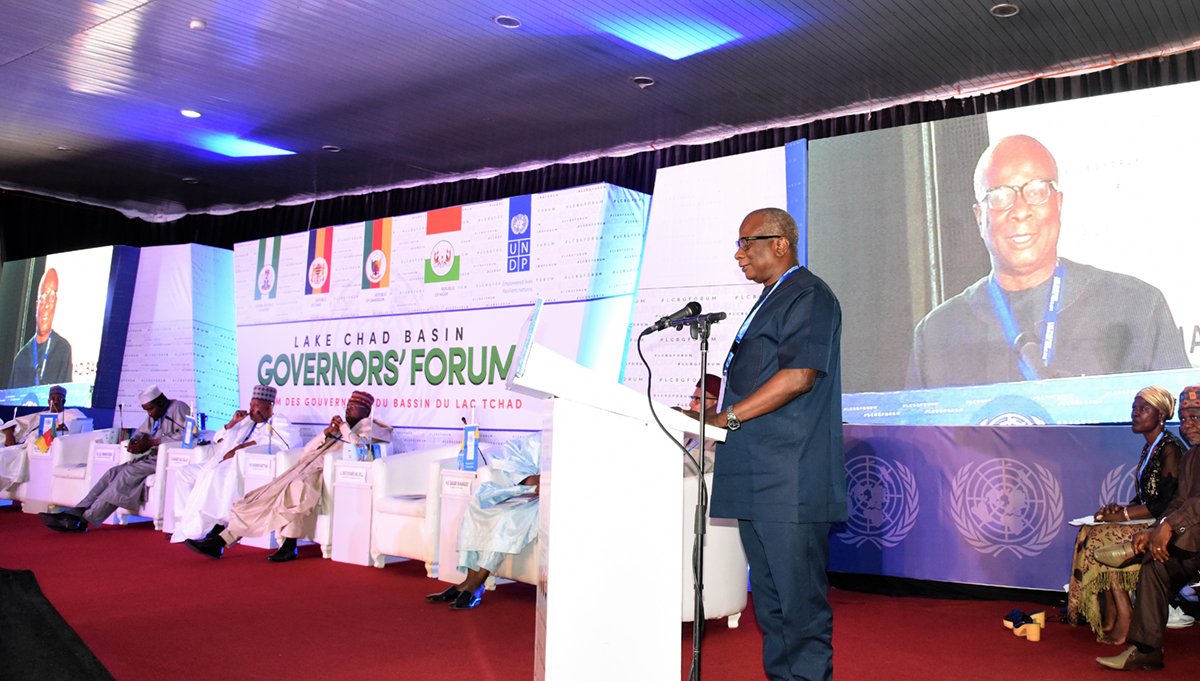 Governors from countries in the Lake Chad Basin gathered in Maiduguri, the
epicentre of the Boko Haram crisis, in Borno State of Nigeria, to discuss and agree on a framework for stabilizing, building peace and fostering sustainable development across the Basin.

Diminishing water levels of the Lake Chad, shared by eight countries, has pushed an estimated 12% of the more than 370 million people in these countries who depend on it for crop and livestock farming,  fishing, commerce and trade to abject poverty, triggered mass migration, conflicts and crises in the region.

Additionally, the nine yearlong Boko Haram insurgency has resulted in mass displacement of millions across the region. The crisis, whose source has been traced in development-related challenges
including multidimensional poverty, has caused billions of dollars in damage to property and disruption of livelihoods in North-East Nigeria.

During the inaugural meeting, seven Governors from States and provinces in Cameroun, Chad, Niger and Nigeria, emphasized that tackling the challenges being faced in the Basin required collective effort by all countries affected. The Governors agreed to establish the Lake Chad Basin Governors’ Forum, a platform that will serve to enhance joint efforts towards stabilizing, building peace and fostering sustainable development across the region.

The Governors affirmed their commitment to using the platform to promote dialogue and cross-border avenues and exchange of information in responding to the crisis which has costed millions of dollars to the region.

The Governors, who acknowledged the importance of human rights in the whole process, also agreed to use the Forum to promote a bottom-up approach to stabilization and peacebuilding of the Basin in recognition of the role that communities as well as traditional and religious institutions, women and young people play in driving the agenda towards stabilization and peace. The Forum will also support ongoing national, regional and multilateral efforts towards stabilization of the region, including those by the African Union and the Lake Chad Basin Commissions to develop a Regional Stabilization Strategy, and efforts of restoring the Lake Chad waters as part of a long-term solution to ensure sustainable development of the region.
In his opening remarks, UNDP Resident Representative, Edward Kallon, stated that while progress hadbeen made in stabilizing the region, more needed to be done to assure the people in the Basin of safety, human rights, dignity, livelihood, and a prosperous future. “The crisis cannot be solved through a unitary
approach. We must pursue a multi-pronged approach – humanitarian, development, peace and counterterrorism – the triple nexus,” he added.

The meeting, attended by over 150 stakeholders representing regional and multilateral organisations, development partners and State Governments, discussed critical issues that needed addressing for the region to be stabilized and fundamental elements to consider for successful reintegration of former Boko Haram fighters into society.

Special Representative of the United Nations Secretary General for West Africa and Head of the UN office for West Africa and the Sahel (UNOWAS), Mohammed Ibn Chambas, commended efforts made by the Multinational Joint Task Force (MNJTF) in narrowing the space occupied by Boko Haram in the region.