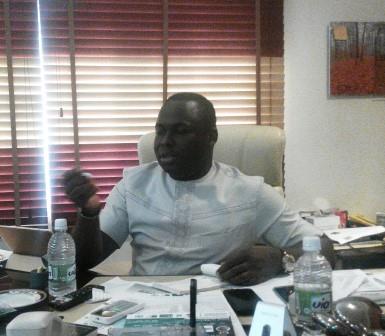 His unassuming and warm personality could make anyone pass him for just every other Start-up Engineer who believes in making exploits in ICT but Ambassador Michael Friday, the Managing Director, VIVID, an ingenious IT Engineer had been into IT and Electrical Electronic innovations as far as he could remember.  He currently owns several IT and Electrical electronics technological innovations to his credits. Some of these innovations are first indigenous built Automobile Home, Advanced Technology Sound Equipment, Electric Motorcycle, Fuel free Tricycle, Fuel free Generator, Battery TV, Battery Air Conditioners among othe innovations that are still in the pipeline. In this up-close and personal series this “Genius” shared with Dotunroy.com team his foray into Science and Technology world, the challenges and the way forward for Nigeria as a country blessed with human capital and untapped potentials within the Science and Technology and ICT sector so as to become the next big thing in Africa and the world!

Read the Interview Below:

Tell us how all these innovations began?

It all started while in secondary school. I remember my first innovation then, I got my hands burnt in the process by the toxic chemical from the batteries (shows his finger). Thereafter I went ahead to study Electrical Electronic Engineering in the University. But sometimes in 2006 I designed my first ipad (Tablet) and Laptops with special features.  It was the first handy Pad ever designed in the world. The first Ipad ever designed with fingerprint. This was ever before Steve Jobs came up with his Apple Ipad in 2008 or so. As a matter of fact, the day I saw his Ipad being launched on CNN, I wept for more than two days, reason being that I started developing my Ipad since 2006. But when it was time for me to mass produce, I realised these multinational companies only wanted to produce large quantities like 5 million, 10 million pieces. I had no resources to handle such and there was no partnership, there was no support from the government either.  At the end of the day, I couldn’t do more than 1000 pieces. Only few people were able to purchase the few produced and the laptops. And since I had limited resources for mass production we ran out of business for a while.

Can you tell us about “VIVID”?

Vivid is our brand. It is a group of companies, began its operation in Abuja in the late 2000s. We have been able to mass produce several of

Tell us about your Automobiles and Motorcycles?

By the grace of God, our Company has built several Automobiles and Motorcycles products that are yet to be officially launched. One of which is the first indigenous built “Automobile Home” luxuriously furnished for the comfort of the users. Everything you can find in a standard apartment such as Refrigerator/Deep Freezer, Bathtub, TV, Exotic Sofa, and Kitchenette with Standard cooker,

Standard Bedroom with Orthopaedic Mattress and fittings, Power generator, Sound System among other can be found inside. We have had top dignitaries such as Acting President, Osinbajo, Bishop Oyedepo, Pastor Adeboye of RCCG amongst others used it for several outreaches. We innovated a fuel free Tricycle that generates its power/energy by just driving it, which you can equally use this Tricycle to power your home after daily use. There is also electric power bike that you charge with electric power and you just drive to wherever you are going. All these products are clean energy products that meet global standards. Some of our innovations will be officially launched into the market by October this year, God’s willing. But we are currently working on mass production so that all Nigerians can benefit from these awesome products.

What are the challenges that you have been confronted with?

products through inventions and innovations. We have brilliant and focused young people who are ready to do great things with their hands but if only an enabling environment and structure could be made available.  Power is currently a major challenge for most innovations in Nigeria. Others are sourcing for raw materials for mass production as well as funding, always bear it in mind that bringing up innovation especially Science and Technology is often capital intensive from the research to the final products.

Advise for the up and coming Science and Tech innovators?

They must be stay committed, determined and focused in whatever field of science and technology they choose. They should look beyond what is happening around them now and be optimistic that someday their innovations will compete at the international level. Above all, governments need to put in place, structures to encourage more young talents and innovators in Science and Technology.

Watch another video of his innovation