“WE ARE YOUNG BUT WE ARE NOT TOO YOUNG TO RUN”: NIGERIAN YOUTHS RALLY FOR POLITICAL INCLUSION 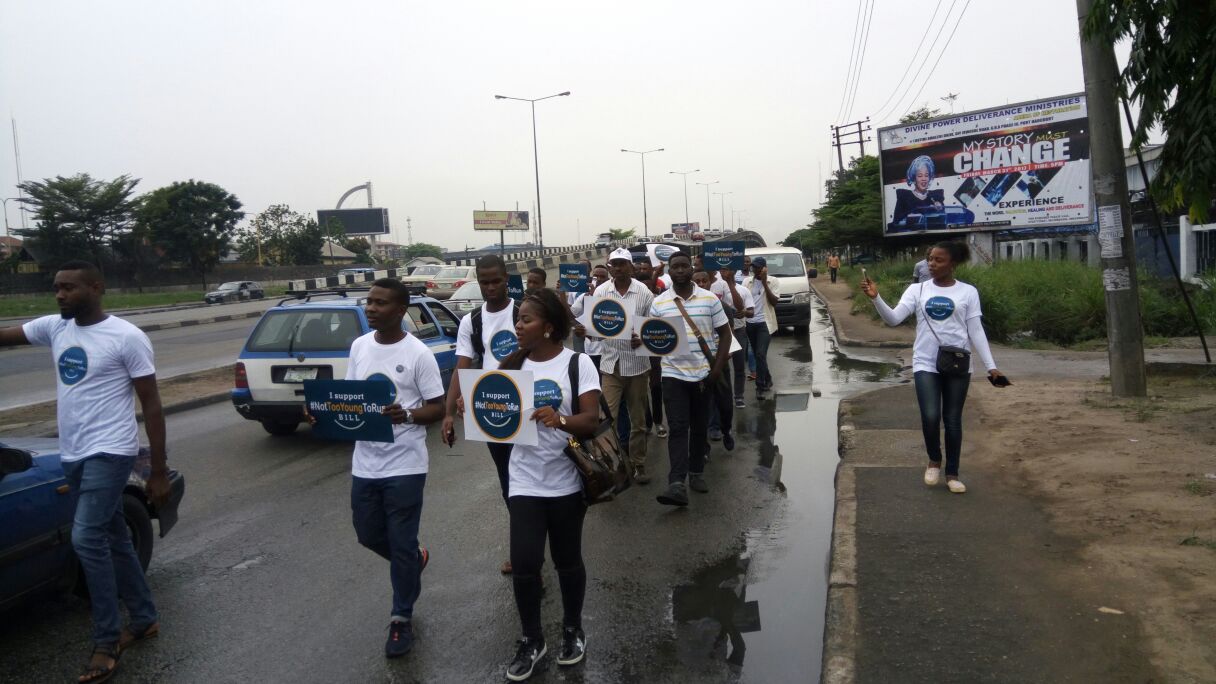 Nigeria’s political history is rapidly changing. Before our eyes, its next chapter is playing out. Young people in Nigeria are saying that their voices matter and they have a right to fully participate in the political processes of their country. They are taking action and demanding that there is nothing about them, without them.

On March 30th  2017, the #NotTooYoungToRun National Day of Action rally unfolded across ten states as over ten thousand young people, adorned in white t-shirts with the inscription, “I support #NotTooYoungToRun”, called on their state legislators to support the bill seeking to reduce the constitutional age for running for office. The general message was simple but clear: it cannot be democracy when over 60% of the population cannot fully participate in the process.

Nothing About Us Without Us

In Maiduguri, Borno State, over 5,000 young people defied security threats to solicit support for the #NotTooYoungToRun campaign. This large turnout of people in a state which only a few years ago, was a killing field for the dreaded Boko Haram sect proved that there is no stopping an idea whose time has come.

“Indeed the youths of Borno have made history. This rally is the first of its kind. It is not common to have people march peacefully to a designated place to make their voices heard to the constituted authorities. I have every reason to be happy and I thank God that I am a part of this historic event in my state. Congratulations to everyone who was part of this history today”.

In Kebbi, about 400 people gathered in Gwandangaji Roundabout, Birnin Kebbi, as early as 8 am for the march to the State House of Assembly. The group was received by the Speaker of the House, Hon. Abdulmumini Kamba, who assured the youths that the Kebbi State House of Assembly will unanimously support the bill for the collective development of the State and Nigeria in General. He said he will use his position as the Chairman of the Conference of Nigerian Speakers to canvass support for the bill.

The morning rain in Port Harcourt couldn’t stop the #NotTooYoungToRun rally in the oil rich state. In his statement, the Speaker of the Rivers State House of Assembly, Rt. Hon. Ikuinyi O. Ibani threw his full weight behind the campaign, saying the bill will be passed into law once it gets to the State Assembly.

Chiefson Nwaiwu, state co-ordinator for the campaign, said the rally is an awareness effort aimed at galvanizing support for the bill. The story was not different in Katsina State. Speaker of the State House of Assembly, Hon. Abubakar Yahaya Kusada, assured the group of his full support for the campaign.

“80% of the members of the Assembly fall within the age of 30 to 40. So, whenever the #NotTooYoungToRun  bill comes, we will give it speedy passage so that our youths can fully benefit from it”.

Similarly, big crowds turned out in Sokoto, Kano, Cross River, Enugu, Osun and Bauchi, with marchers include men, women and persons with disability. The marchers peacefully engaged with and secured the commitment of the leadership of the State Houses of Assembly to pass the #NotTooYoungToRun bill once the National Assembly transmits the Constitution Alteration Act to them for action.

In all the rallies, participants demanded that young people be given the constitutional right to fully participate in democratic processes, as it is a human right and not a privilege.

The Road To The National Day Of Action Rally

What began as a simple idea in the conference room of the Youth Initiative for Advocacy Growth and Advancement (YIAGA) in May 2016 has developed into a global campaign launched by the United Nations Youth Envoy in Geneva to expand democracy in November 2016.

The #NotTooYoungToRun campaign is an advocacy for the passage of the #NotTooYoungToRun bill which seeks to lower the constitutional age for running for elective office in Nigeria. The bill also seeks to mainstream independent candidacy into Nigeria’s electoral laws.  Samson Itodo, Executive Director of YIAGA, one of the youth groups leading the campaign says the ultimate goal of the bill is to promote increased youth participation in the political process, as well as strengthen and increase the competitiveness of the political process.

“#NotTooYoungToRun will guarantee equal opportunity and participation of Nigeria’s youth population in the political process. For democracy to thrive, a level playing field must be created for all adult citizens to participate as both voters and candidates”, he said.

Hon. Tony Nwulu, representing Oshodi/Isolo Federal Constituency II of Lagos State and Senator AbdulAziz Nyako from Adamawa sponsor the bill in the National Assembly. Nwulu says the independent candidacy arm of the bill will check the practice of candidacy imposition by political parties and also promote issue-based politics. The bills are currently before the House of Representatives and Senate Committees on Constitutional Review.

Since its inception, the advocates of the #NotTooYoungToRun bill have held series of activities to drum up support for the passage of the bill. In June 2016, young people gathered in Abuja to debate the merits and demerits of the bill. Similar debates took place in several states of the federation. Campaign organizers have set up several media engagements, including bi-monthly Twitter chats, to educate the public on the need to support the bill. On Twitter alone, the hashtag, #NotTooYoungToRun has trended at number one on more than six occasions and reached over 50 million people.

The need to expand advocacy on the bill to include youth groups, political parties, media, traditional, religious and elected officials who hold strong influence on legislators led to a three-day community organizing training for selected thirty-six youth leaders. This training, done with support from the National Democratic Institute, would prove pivotal to the success of the National Day of Action.

The campaign has also engaged the Ken Nnamani-led Committee on Constitution and Electoral Reform, which is empowered to draft executive bills for constitutional amendment to the National Assembly for legislation. At its public hearing held in the South-East and South-South Zones, the #NotTooYoungToRun campaign presented its memorandum to the Committee.

At its North-Central public hearing held in Abuja on March 30, 2017, Ibrahim Faruk, Strategy Member for the #NotTooYoungToRun campaign and YIAGA Program Officer said that if the constitutional amendment and electoral reforms are passed, they would address the legal challenge young people face when seeking to vie for political offices, thereby guaranteeing inclusion in the political process.

He presented a memorandum of the campaign to the Committee Chairman who promised that all considerations made at the public hearing have been acknowledged.

What’s Next After The National Day Of Action?

Since the National Day of Action rallies of 30th March, 2017, enquiries on how to be a part of the campaign have increased by over 50%. To this end, the campaign has integrated a sign up page on its website (www.yiaga.com/nottooyoungtorun) for those interested in joining the campaign. These initiatives notwithstanding, a critical question remains: what is next for the campaign?

Ibrahim Faruk says the campaign intends to hold National Day of Action rallies in all the 36 states of Nigeria. So far, rallies have taken place in only ten states. He said the campaign couldn’t hold a nation-wide National Day of Action rally on the same day as some State Houses of Assembly were on recess. Anambra and Plateau States will, however, hold their rallies in the first week of April. The campaign is also planning a grand rally to the National Assembly to demand support for the bill from federal legislators.

He further revealed that the National Day of Action rally is not an end in itself as the campaign will continue to engage all critical stakeholders to ensure that the #NotTooYoungToRun bill is passed into law.

“After the march, young people in the states will continue to create awareness in the media, organize their constituencies to engage with and meet critical stakeholders as part of advocacy bill is passed”.

With its sustained advocacy for the removal of constitutional restrictions that bar young people from running for elective offices, young people are calling on the National and State Assemblies to recognize “the fierce urgency of now” and pass the #NotTooYoungToRun bill, as no nation desirous of social and economic development, will sideline over half of its population from fully participating in democratic and governance processes.