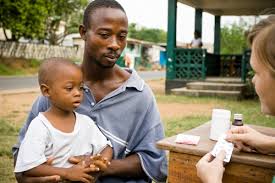 Autism is one, out of several developmental challenges in children that would always require consistent examination and early medical help of either a pediatrician or an expert in Autistic Disorder.

In most African countries and other developing countries, autism is often perceive as some kind of evil or curse brought upon the affected child caused by the sin of the parents or by the witches, thereby causing the child to suffer huge neglect and be treated with utmost disdain. This is even worse when parents are quite poor and without means to provide adequate care for such a child.

Recent survey carried out in 3 West African countries namely: Ghana, Nigeria, Ivory Coast has shown that only 5% of the children within the autistic spectrum are given adequate care and attention while higher percentages of children that are considered normal and without developmental disorders are adequately cared for. This is mostly attributed to low awareness among parents on what could cause autism in a child.

However, several researchers have revealed through their studies that, some countries with highest autism rates in the world are among the most developed countries in the world. There are studies that have tried to use this fact to explain the autism prevalence in them, arguing that as people are getting more familiar with autism, its symptoms are easier to detect.

In most developing countries, parents are bound to raise their children assuming that everything is normal with these children ignoring possible early symptoms associated with autism in a child particularly at infancy. Early symptoms such as fixed gazing at a particular object, lack of interest in what happens around them, often refuse to smile or giggles, extremely quiet not often cry among other symptoms. These symptoms make it difficult for the child to learn, act, behave or perceive things like every other normal child.

This assumption that every other child must exhibit similar characteristics, interests, growth and development poses major challenge particularly to the parents who are quite new to parenting business and nursing infants.

Despite this high level of ignorance, parents in most third world countries are now being properly sensitised and educated on major signs and symptoms to watch out for in their babies, since early detection of these symptoms which usually occur in the first 18 months is the best because proper diagnostic and treatment are usually effective at infancy.

In Nigeria, however, the percentages of children with Autistic Disorder have grown from 10% to 15% in the last 5 years, between 2011 and 2016. Nevertheless, there are foundations, non-governmental organisations and international healthcare support bodies, who are currently on the vanguard sensitizing mothers as well as giving financial support particularly for those with complex cases of autism.

This is just a step forward to help saving those indigent parents who are being confronted with unexpected challenges of raising children with autistic disorder.

May Nigeria not happen to us!

Why #Babaijesha Should be Treated Behind Bars!