#SAYNOCAMPAIGN, OGONI SOLIDARITY FORUM CALL FOR THE REVIEW OF THE TRIAL THAT LED TO KEN SARO WIWA’S DEATH 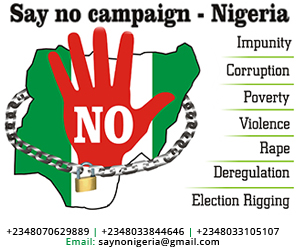 SAY NO CAMPAIGN, Ogoni Solidarity Forum under the leadership of Mr Celestine Akpobari and other Human Right Activists have called for the review of the trial that actually led to the execution of the great environmentalist, Ken Saro Wiwa under the Military Dictator, General Sani Abacha on 10th November 1995.

They made this call today at the CSO Media Roundtable in Abuja with the theme “INTERROGATING THE OGONI STRUGGLE: 21 YEAR AFTER”.

Speaking at the Roundtable, Celestine Akpobari said it is highly imperative to appraise and draw the important lessons from the Ken Saro Wiwa’s struggle, his death and the agonies and neglect which Ogoni people, a minority group in Nigeria have suffered since 1993 when the struggle for resource control began.

In his welcome address he said “It is just few days to November 10th, which is the remembrance day of the Ken Saro Wiwa, the Great son of Ogoniland, an environmentalist, writer and freedom fighter who was unjustly killed under Abacha regime 21 years ago.

“Now the fundamental question is, 21 years down the line, what has been the significance of Ken Saro Wiwa death as a symbol of a minority struggle? We must also state that the trial that led to the execution of Ken Saro Wiwa be reviewed” he affirmed.

Akpobari added that the Ken Saro Wiwa has since his death became a symbol for environmental protection and the human rights, the ability of his leadership to create a powerful connection from the past to present and future is a great legacy and lesson for all.

He cited instances of a Latin America Country which began its struggle having read the history of Ken Saro Wiwa struggle for the Ogoniland.

Mr Jaiye Gaskia, Convener, SAY NO CAMPAIGN referred to Ken Saro Wiwa as a stabilizer of Ogoniland and that his death has since destabilized Ogoniland and her people. He further buttressed that the consequences of Government inability to properly engage its citizens is always catastrophic as it was during the Abacha Military Regime which degenerated to resource control struggle in Ogoniland and other parts of the Niger Delta regions.

“Ken Saro Wiwa will forever remain an icon of struggle and Human Rights Defender and he will always be remembered by the people of Ogoniland and the Nigerian activists” he alluded.