‘Violent extremism affects us all, pushes the already vulnerable beyond their ability to cope and survive’ – Mandisa, UNDP Rep 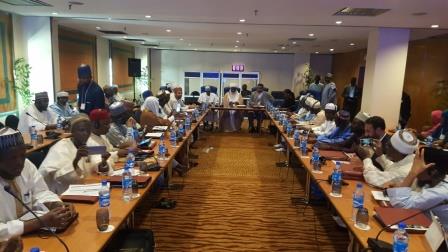 [Statement read by Acting Resident Representative, Mandisa Mashologu at the Traditional and Religious Leaders Conference on Countering and Preventing Violent Extremism in Africa.]

On behalf of the United Nations Development Programme in Nigeria and our Regional Service Centre for Africa based in Addis Ababa, I wish to welcome all of you who have travelled from far and near to this summit of traditional and religious leaders as key resources, partners and advocates for enhancing the national response to religiously motivated violent extremism and the governance of religious institutions. The fight against violent extremism, which must not be misconstrued or mistaken as the fight against any particular religion or religious group, is a collective endeavour and responsibility, as violent extremism has already contributed to a dramatic reversal of development gains and quality of life for all, and also threatens to stunt sustainable development prospects for decades to come.

Violent extremism affects us all cutting across national borders. It pushes the already vulnerable beyond their ability to cope and survive. Our latest National Human Development Report 2016 already highlights the fact that where there is insecurity, development suffers, poverty thrives affecting women and children the worst.

On January 15th 2016, the Secretary-General presented his Plan of Action to Prevent Violent Extremism to the General Assembly. The Plan makes 3 key recommendations:

In response, UNDP took this challenge further and produced a regional strategy on “Preventing and responding to violent extremism in Africa”. The programme emphasises a developmental approach which is underpinned by a theoretical framework which maintains that individuals, ideology and institutions must be consistently engaged to effectively understand what drives and enables violent extremism in Africa and therefore address the root causes through a comprehensive and holistic approach.

The programme is being implemented in three categories of countries; “epicentre”-countries (Nigeria, Mali, Somalia) where extremist groups are active; “spill-over” countries where impacts are being felt (Cameroon, Chad, Kenya, Mauritania and Nigeria) and in “at risk” countries which exhibit some of the underlying and root causes of violent extremism (CAR, Sudan, Tanzania and Uganda).  You will hear more on our regional programme from my colleagues from the Regional Service Centre.

Preventing and responding to violent extremism is important to UNDP as the lead development agency in the UN System and builds on our areas of work and partnerships in governance and rule of law, conflict prevention, gender and youth empowerment, livelihoods and coordination of development assistance in the attainment of the Sustainable Development Goals. We fully recognize that national governments, regional and sub-regional organizations, religious leaders and faith based organizations, bilateral donors, civil society organizations, media groups, and community representatives are key partners as no one actor alone will be able to prevent and address this destructive phenomenon to ensure and safeguard Africa’s development gains.

Here in Nigeria, we have seen the impacts of Boko Haram on the livelihoods and security of the people in the North East and neighbouring countries. The insurgency has resulted in 14.8 million people being affected with 7 million in need of humanitarian assistance, 1.8 million IDPs, 4.5 million facing acute food insecurity and close to 160 000 refugees who have crossed into Cameroon, Chad and Niger.

There is a Humanitarian Country Team comprising of UN agencies, Donors and international non-governmental organizations and an Inter-Ministerial Task Force has recently been established to more effectively coordinate the response. This collective effort has gained momentum with some notable key achievements to support the newly accessible areas, but people are still suffering and more needs to be done.

As one of the epi-centre countries, Nigeria, through UNDP support, has embarked on a programme of support on “De-radicalization, Countering Violent Extremism and Migration in Northern Nigeria”. The overall objective of this intervention funded by the Japanese Government aims to contribute to capacity development of civil society organizations, communities, religious leaders and security agencies in developing and disseminating counter-radical narratives to radical ideologies of fundamentalist groups in Nigeria. It will achieve this through: (a) Enhanced capacity of security agencies in investigation and prosecution of terrorism, as well as in preventing and tackling irregular migration, (b) Strengthened capacity of local religious communities in proffering counter-narratives to extremist views and perspectives towards the prevention and countering of radical views capable of breeding terrorism and (c) Enhanced community engagement in de-radicalization.

The targeted beneficiaries include youth-members of Islamic religious movements with a particular emphasis on the North-Eastern states of Adamawa, Borno and Yobe. With the support of our Regional Service Centre for Africa we have already developed a broader, longer term programme of support in-line with our on-going work and the regional programme.

We firmly believe that addressing the violent extremism challenge goes beyond military engagement. Though important, it must be a sustained and countered not only through a long-term economic approach, but must also be holistic, targeting individuals, communities and the structural dynamics and drivers of violent extremism. It therefore requires ownership and leadership at grassroots and communal level in communities that are directly and indirectly affected.

We see the role of traditional and religious leaders as crucial in complementing other efforts in a multifaceted approach. UNDP stands ready to support in the work of preventing and countering violent extremism but such efforts must be owned and led by national and local stakeholders in the respective countries.

Given the regional dimension of the crisis, our Regional Service Centre for Africa and our Country Offices will work together with the various countries in synergizing initiatives so we can learn from one another, share experiences and improve the process of ensuring peaceful societies and an enabling environment for sustainable development.  As we are all aware, without peace there can be no sustainable development.

Let me conclude by thanking our host, HE the Sultan of Sokoto and the Sultan Foundation for Peace and Development, and the International Interfaith Peace Corps for working closely with our Regional Service Centre for Africa and UNDP Nigeria for this very important dialogue and engagement. If we are to succeed, the role of traditional and religious leaders across our respective countries is an integral part and partnership in preventing and responding to violent extremism in Africa.