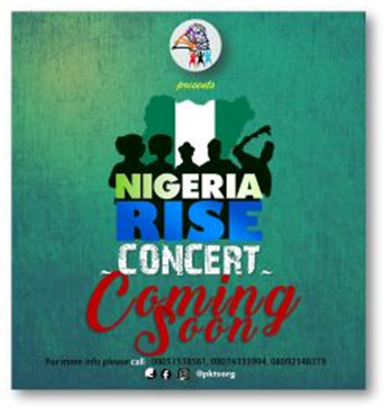 The organisers of Nigeria Rise Concert, Franklin Giva CEO, PKTS International and Phil Roberts in collaboration with STUDIO 24  have officially unveiled the comperes for the most anticipated event in Nigeria right now.

According to Phil Roberts who he is also the Project Director of the forthcoming event, “The official anchors of Nigeria Rise Concert are Adora Onyechere of AIT and Stanley Bentu of WE FM, we decided to pick the best hands for this event because of our penchant for excellence and that has been the hallmark for our projects over the years”

He added that STUDIO 24 has been in charge of the official photo shoot for these anchors which is intended to be part of the publicity for the event.

The Profile of Comperes below

Adorable Adaora Onyechere is a Leading Nigerian Broadcast Journalist, incredibly talented with a bouquet of fans across the world. She is recognized as the co-anchor of Kakaaki, a daily talk show on Africa Independent Television.She has also made numerous Journal Publications which include Poetry for Life (Poetry.com), Women in the World (National Trail Column), and Black Girl with a White Heart (Fiction). Her artistic talents have made her a very smart addition to the group of professionals already available and have certainly earned her the office of Broadcast Journalist/Assistant Manager she currently occupies

Stanley Bentu is a debonair and incredibly Talented Radio Host with A Voice second to none on radio presentation. He was born September 13, 1972 in Zaria, Nigeria, He established himself as the founder of Firstwave records and later developed into a song writer, artist, producer, philanthropist, businessman and on air personality on WE106.3fm in Abuja.He is the CEO at A-Plus Communications Ltd., The General Manager at C&L Productions Ltd. Jos/Abuja, Director of Press and Public Affairs to The Governor Plateau State.

His  vastly improved media relations between various State Governments and the Media played a big role in the resolution of conflict between the State chapter of the National Union of Journalists and The correspondent’s Chapel which had broken off from the union. Stanley was also known for the effective use of radio jingles and media messages to douse tensions during periods of crisis in Plateau State

WATCH OUT FOR THIS GREAT INDEPENDENCE EVENT