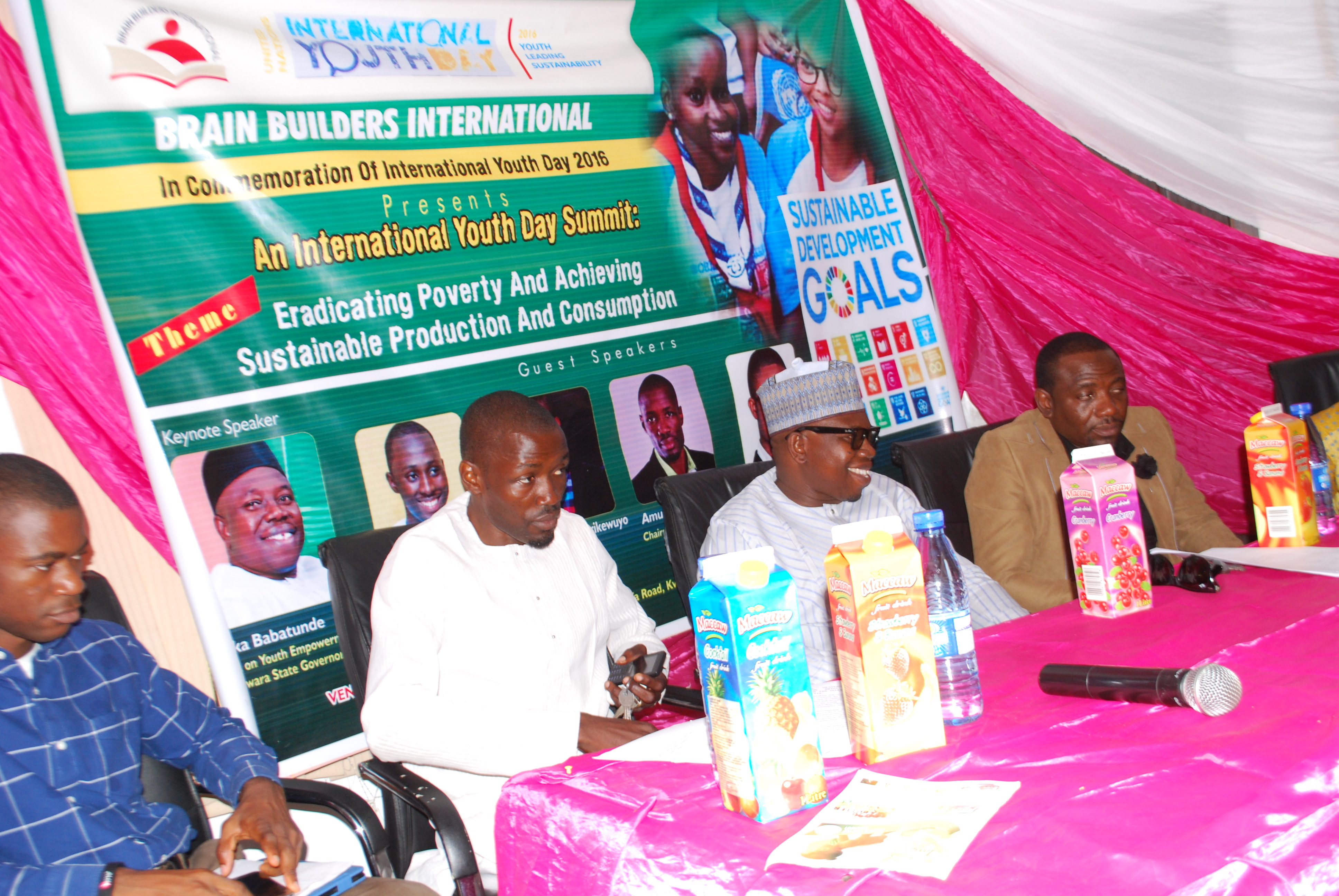 In commemoration of the 2016 International Youth Day Celebration, a youth-based Non-Governmental Organisation, Brain Builders International has organised a one day summit. The summit themed: “Eradicating Poverty and achieving sustainable Production and Consumption” held on Monday, 15th August 2016 at the Nigerian Union of Journalists (NUJ) hall in Ilorin, Kwara state.

In his keynote address, the Senior Special Assistant (Youth and Empowerment) to the Kwara state governor, Mr. Saka Babatunde who spoke on Public leadership, emphasised that in the country today, there’s a gap between the leadership and the led. In his words: “Public leadership is all about taking responsibility, and the fear of God is prominent and important”. He appreciated the NGO for its innovative ways of finding solutions to issues that affect the youths.

Other guest speakers which include Mr. Abdulgafar Arikewuyo (Lecturer, University of Ilorin), Mr. Mubaraq Tiamiyu (A 2016 Mandela Washington Fellow) and Mr. Amujo Temitope (Chairman, Amugold group) all took their turns to advise the youth on the best approach to attain leadership positions, the need to be solution providers and not blaming the government all the time, the synergy between solving problems and been a leader, and the step-by-step guide to becoming self-sufficient and eradicating poverty in the society.

The summit also featured a Panellist Session, where participants were taking through the Opportunities that are available online, and how to harness these opportunities to become more productive.

Earlier in the summit, the national co-ordinator of the NGO, Mr. Olasupo Abideen Opeyemi while addressing the participants stressed that the summit was organised to give practical exposure to them, and provide opportunity to share ideas with other youths. In his words: “Nigeria and Africa as a whole is at a point where youth unemployment has become a menace, it’s therefore expedient for our people particularly the youths to embrace entrepreneurship in order to create jobs and wealth”.

He also reeled out some of the activities of the NGO since 2014 in kwara state which includes: Youth entrepreneurship summit, Career talk show, workshop on climate change for primary and secondary school students, an advocacy programme in Kaiama on the importance of Girl Child Education, the #NotTooYoungToRun Bill public debate amongst others.

A participant at the summit, Muhammad AbdulKabir (A student of Unilorin) while speaking with our correspondent appreciated the NGO for organising the programme. In his words: “I have learnt a lot from this programme, it’s indeed an eye-opening session”