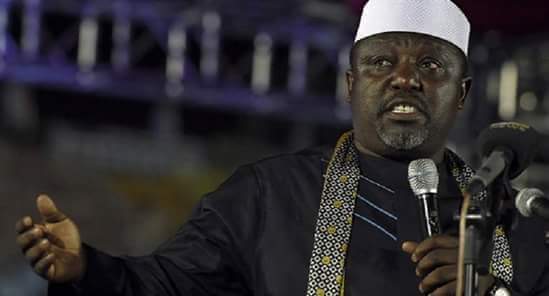 It is with a very heavy and bitter heart that I write to you.
This is a letter that has tarried in coming but long overdue.
I’m afraid I have to speak to you very bluntly and succinctly, as I am not given to certain lexical embellishments, especially when addressing those who have no regard for their constituents.

Sir, I must put it to you that from genesis, you had no developmental plans for Imo state.
You are a businessman, a smart businessman who saw an opportunity in 2011, when Ohakim became unruly.
You capitalized on that opportunity, aided by your kwashiokored philanthropic free education given to a selected few.
You were a master orator who mesmerized the hearts of most Imolites, especially the villagers and undergraduates.
You made empty promises while in your dark, inhuman heart, you had a sinister agenda!!!

___Imo sate, in these few months has recorded the highest number of protests! This time on weekly basis!
On February 10, the NLC from the 36 states of the federation held protest, shutting down Sam Mbakwe Airport, protesting the suspension of workers from 19 parastatals of the state and salary cuts.
___Newly employed teachers protested over unpaid salary for 6 months!
Why employ fresh teachers when you’re busy slashing salaries, owing salaries and retrenching workers?
___Just recently, IMSU students protested over prolonged strike by their lecturers who embarked on a strike over 30 percent slash of their salaries.
The students numbering over 2000 were dispersed by your police stooges with pepper spray.
___Doctors are owed over 4 to 5 months salary.
___Teachers are being owed salaries for 13 months!!!
___The most heartbreaking for me is owing old and fragile men and women their pensions, thus making them protest.
Some even collapsed in their bid to remind you that you are sitting on their sweat and selfless service and feeding fat on them!!
(I’ll make a separate post for this!)
___You keep demolishing buildings without plans. It is visible to the blind and audible to the deaf that most of these demolitions are witch-hunting.
___Now, you’re on a pet project, one that will be calamitous to the lives of Imolites!!
You build bridges with 6 inch blocks!!!
___No roads!!! Not a sound one!!

Your government is a total disaster and a failure of epic proportions!!
More unbearable is that you are the chief architect of your people’s misery.
You are the catalyst to what will ultimately be the cataclysmic deluge that will characterize your descent!!
If I may ask, what happened to the bailout funds given to you?
You claim Imo state is broke, yet you had the money to buy a Christmas tree for over N600 million!
Imo state is broke, but you have enough resources to host muslims to feast after Ramadan fast.
Imo state is broke, yet Imo state has the capacity to host football matches.
Why do I have strong premonition that perhaps, the motive behind your desire to relocate the Eke Ukwu market to an uncompleted site, is because of your legendary, insatiable, gluttony for land…..?
Why is Ama Awusa not being relocated too?
(Just thinking aloud sir).
It is not a hidden fact that it is a government of family, by the family and for the family!!

The greatest slap to the faces of Imolites came in two phases…..
First, was your backing Fulanis in your state and approving of the grazing bill to the detriment of the lives of your people, who are being slaughtered most barbarically by the same people, in the name of cattle rearing!!
Why should the government meddle in a private business?
The second is your move to establish a college in Bauchi state in commemoration of their 40 years as a state, while you claim that the state coffers cannot pay civil servants!!
I find it inhuman and insensitive that in your priorities, the people whose mandate kept you on seat are being relegated to the background and considered irrelevant!!
You are an Igbo man from Ideato South.
You will never be a northerner, but you will be like the leprous general, who despite his wealth and influence was avoided by his kinsmen.

You, dear Sir have left your footprints on the sands of time!!
Posterity will judge you!!!