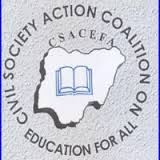 Civil Society Action Coalition on Education For All (CSACEFA) has called on relevant and concerned authorities to ensure that proper implementation mechanisms are being put in place in tackling emerging issues in education sector in Nigeria. This call was made today at the Press Briefing organised by the Coalition in Abuja headed by Mr Kabiru Aliyu, National Moderator, CSACEFA.

Aliyu, in his remarks commended the effort of the Federal Government initiative of National School Feeding Program which aims at increasing enrollment of pupils in schools and generate employment thereby improving the standard of education in the country. He however, alluded that, there is still so much left to do in salvaging the sector. There is need for strong monitoring structure be set in place involving school based management communities, CSOs, The Media and other relevant stakeholders’ he affirmed.

Chioma Osuji, Policy Advisor, CSACEFA said Government need to involve major stakeholders at the planning stage of any programme or project in education sector before they are rolled out. ‘Proper consultation with the major stakeholders in education sector should be done so as to avoid pitfalls and failed programmes/projects especially when proper implementation strategies are not in place’ she said.

She also criticized the fact that education sector is often seen as last resort for job-seekers, thereby turning the sector into a ‘dumping ground’ for charlatans and half-baked teachers with no single passion for teaching profession. ‘I have noticed that most people resort to teaching to earn a living because it is their last resort, which shouldn’t be, Teaching is a noble profession and government should endeavour to make it more attractive’ she posited.

Osuji, citing 500,000 teaching corps intervention scheme as classic example, said the scheme seems laudable however if not properly implemented may become just another ‘build up’. ‘Already there is backlog of non-payment of teacher’s salary at various states in the country, these teachers deserve to be paid before anything, teachers’ welfare should be part of Government priorities’ she explained.

Rosemary Effiong, National Coordinator, Society for Empowerment and Self Reliance, who is also a member of the Coalition lamented that provision and renovate of school facilities to ensure safe and conducive environment to learning is as important as what the children are being taught in school. ‘Most public schools are in dilapidated state, some do not even have seats and tables students are often seen sitting on the floor or on the windows during lectures’ she added.

The Coalition also condemned the move by the Oyo State government to privatise most of the public primary and secondary schools in the state, as this may deny thousands of vulnerable and less privileged children in the states access to quality education.