[Must Read] Fatma Samoura, Head of UN in Nigeria Speech at the Dialogue Session on Promoting Sustainable Growth and Inclusive Development of Nigerias States 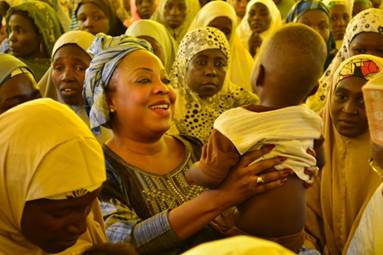 Read the speech below:

Mr Chairman, let me begin by thanking you for inviting me to this important dialogue session on Promoting Sustainable Growth and Inclusive Development of Nigerias States’. Let me also congratulate you and all the members of the Forum for Inclusive Nigerian Growth (FIND) for taking the initiative of promoting the generation and sharing of ideas on the diversification of Nigerias economy and government revenue sources beyond oil. For me, it is nice to be back in this lovely city of Lagos, a city that has registered tremendous growth in the recent past, and together with Kinshasa, is now well poised to be classified as a mega city in the not-so-distant future.
This dialogue session is being held at a time when the whole nation is waiting, with bated breath, the conclusion of the budget making process and subsequent implementation of key development programmes. The session is also being held at a time when the country is readying itself to host a major Economic Summit and has begun, in earnest, to put in place structures, mechanisms and strategies for the mainstreaming of the Sustainable Development Goals (SDGs) into the national and sub-national policies, plans and implementation frameworks, such as the annual budgets. Mr Chairman, the coming weeks and months hold great promise for the people of this great nation, but only if action is taken now and importantly if we adopt a business unusual approach to doing the business of development.

Mr Chairman, since independence in 1960, Nigerias overarching developmental goal has been to achieve rapid economic growth; improve material prosperity; and promote peace, harmony and social progress. Successive governments have formulated and implemented many policies and programmes in order to ensure that this noble goal is achieved. Overall, growth performance has been good over the years. Real Gross Domestic Product (GDP) growth rates averaged 5.1 percent between the periods 1961-70 and 5.0 percent between the years 1971-80. And even though there was a dramatic decline during the 1981-1990 period, growth performance improved thereafter to 5 percent during the 1991-2000 period and further to 6 percent for 2001-2007. Similar trends were observed more recently over the 2008 -2014 period. The otherwise impressive growth rates have however, not translated into significant declines in unemployment rates, the incidence of poverty and income inequality. While 27.2 percent of the Nigerian population were classified as poor in 1980, by 2010, according to the National Bureau of Statistics, the figure had risen to 69 percent. That is, currently two out of every three Nigerians live below the poverty line, with women and youth bearing a disproportionate burden. This is a worrying statistic indeed.

Ordinarily, Mr Chairman, one would expect that with such high growth rates, fueled largely by increasing oil production and rising global oil prices, the incidence of poverty and the rate of unemployment would decline. But paradoxically, the rate of unemployment, the incidence of poverty and income inequality have all risen. It is this paradox, Mr Chairman that has drawn the attention of government and other development actors, the United Nations included, to the imperative of achieving equitable, inclusive and sustainable growth and development. Allow me, Mr Chairman, at this point therefore, to turn my attention to the UNs Support for Equitable and Sustainable Growth in Nigeria. I do so with a huge sense of modesty and humility since we, as the UN, are not a major player, in terms or resources, in the development process of this country. We however, remain a trusted partner to the government and honest broker, bringing to bear our vast experiences, proven ideas and enormous expertise gleaned from across the globe and over several decades and in diverse contexts, to bear in the development process.

Mr Chairman, our current development assistance framework, christened the United Nations Development Assistance Framework (UNDAF) and covering the period 2014-2017, focusses on achieving growth, poverty reduction and equity; in addition to seeking to address social development and governance challenges. The UNDAF emphasizes good governance; social capital development; equitable and sustainable economic growth; and human security and risk management. I now wish to turn my attention to a few of the areas of our focus under the UNDAF, highlighting some of the early results before I conclude by presenting some elements of a roadmap for the future.

Mr Chairman, with respect to promoting the investment climate in the country, with the support from the UN, key ministries, departments and agencies (MDAs) which benefitted from institutional capacity building, especially on investment project appraisal, currently serve as focal points on investment promotion and coordination. For the very first time, the Nigerian Industrial Revolution Plan (NIRP) Secretariat has been established at the Federal Ministry of Industry, Trade and Investment to proactively promote and coordinate investment activities in the country. Additionally, the Investment and Technology Promotion Office has been launched while key staff of the Bank of Industry (BOI) have been trained and certified in Computer Model for Feasibility Analysis and Reporting (COMFAR). They are now able to model, appraise and report investment projects for industrial development while the Nigerian Agribusiness Group (NABG) currently provides a platform for driving private agribusiness investments in the country. Also, for the first time, the UN is building a trade infrastructure that is consistent with international best practices. The absence of an internationally recognized trade infrastructure has been a major impediment towards increased exports from Nigeria, especially in the recent past.

In terms of energy, key MDAs including the Federal Ministry of Power and Energy Commission of Nigeria, now have the requisite capacity to develop and implement policies related to renewable energy solutions and industrial energy efficiency including support to investments in solar, small hydropower, wind and biomass to generate electricity especially in the rural areas for productive activities.
In the real productive sector, the UN has supported activities in agribusiness and agro industrialization as well as national policies to provide an enabling environment for micro, small and medium scale enterprise (MSMEs) development. Some of these activities are already attracting domestic and foreign direct investments. With respect to employment, the UN has supported youth employment schemes in several states of the federation and provided life sustaining skills acquisition programmes for youth in several sectors of the economy namely in agriculture, building and construction and services.

Mr Chairman, these are just but a few examples of areas in which the UN has been able to make some modest contributions to economic growth and development during the current programming cycle. Needless to say, many challenges remain and we look forward to continued and renewed partnerships in order to tackle, together with other stakeholders, the plethora of development challenges that this country still faces. At the UN, we believe that in order to pursue economic growth that is both equitable and sustainable, a number of structural reforms are needed. This is increasingly becoming more urgent as countries embark of the SDGs implementation process. Going forward, Mr Chairman, we will pursue, together with our national partners, especially the government, an economic diversification programme that elevates the agricultural, non-oil manufacturing, solid minerals and the service sectors, shifting emphasis and attention to higher value adding activities whilst reducing reliance on volatile commodity exports such as oil and gas. We will also focus on youth education and skills development. For the poor and vulnerable and to ensure that no one is left behind and that the farthest behind are reached first, we will promote social protection, while at the same time advocating for budgetary reforms to ensure increased allocations to the social sectors, especially education and health. Due attention will also be accorded to the development of green growth plans, including the promotion of sustainable production and consumption. Such plans will help to improve the investment climate for the private sector to engage in sustainable activities and provide for sanctions against environmentally destructive behavior. Lastly, Mr Chairman, in order to tackle the widening income inequality, we will work with our national partners to ensure that growth is not only sustained, but is broad-based and inclusive and that an increasing number of people are engaged in economic activities and benefit from the growth process.
We look forward to working with the forum, in the future, in generating sound ideas and promoting dialogue around sustainable growth and inclusive development as we all work together to support national efforts aimed at achieving the SDGs.
I thank you all for you attention.