PDP CHIEFTAINS DEFECT TO APC AHEAD OF GOVERNORSHIP POLL

Nov 17, 2015 PDP CHIEFTAINS DEFECT TO APC AHEAD OF GOVERNORSHIP POLL 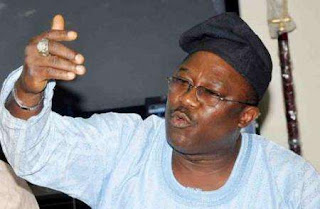 With less than a week to Kogi governorship election, members of Sen. Smart Adeyemi’s political organisation and notable Peoples Democratic Party (PDP) chieftains in Okunland have defected to the All Progressives Congress (APC).
Mr Fehinti Dada the Director-General of the organisation and former chairman of Ijumu Local Government Council, led the group of the defectors in an elaborate ceremony held on Monday in Iyara, headquarters of the council.
Receiving the defectors, the APC standard bearer, PrinceAbubakar Audu, commended their courage, saying that the wind of change pervading the country had finally come to Kogi.
He urged them to bring their wealth of experience to bear on the party to enable it shine at Saturday’s poll.
Dada said that he and the other members of the organisation defected from the PDP because the party had failed the people.
He said that a survey conducted by the organisation showed that the PDP led administration in the state had collapsed activities at the third tier of government and placed council staff on percentage pay.
“I was in Ikole local government area of Ekiti last week.
“To my surprise, the council did not owe workers and recorded lot of achievements that had direct impact on the people, despite receiving less allocation in comparison to most councils in Kogi,”he said.
Dada assured Audu that the defectors would work with the existing party structure on ground and deliver the council to the APC.
In a related development, Mr Duro Meseko former member of the House of Representatives, who represented Kabba/Bunu Federal Constituency in 2003 to 2007, also dumped the PDP for APC with thousand of his supporters at Iluke in Kaba/Bunu constituency.
Meseko said that he and his supporters could not afford to be left out in the wind of change blowing across the country and implored the people of Bunu to come out en-masse and vote for APC on Saturday.
Sen. Dino Melaye, representing Kogi West Senatorial District at the Senate advised the defectors to join hands with older members of the party to defeat the PDP administration in the state.
He said that Audu remained the best of all the candidates jostling to rule the state because of his wealth of experience in statecraft and verifiable achievements that had continued to affect lives positively across the state.