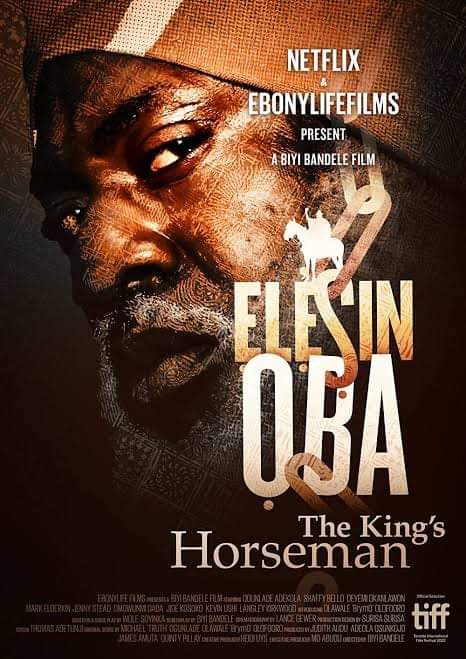 I decided to spare couple of hours out of my tight schedule yesterday to watch #Netflix #ElesinOba movie, after I saw a small review of it done by Abiola Alaba Peters, media colleague.

Although prior to that, I had seen couple of its trailers on YouTube. And being a creative work of two people I hold in high esteem – firstly, it is an adaptation from the work of a world renowned Noble Laureate, our own Wole Shoyinka. And secondly, it was put together by Biyi Bandele (May his gentle soul rest in Peace). That made me want to see it.

Elesin Oba movie didn’t really hit the right spot for me. It’s too flat, perhaps for its storyline. It’s quite predictable. No suspense of any sort.

For me, being an art inclined person, I have always been critical of any art works from music to visual art to scripting to filming. Perhaps because I’m a scriptwriter myself, a skill I picked up without any formal training. So predicting or creating a sequel to any movie or character comes easy for me.

There are unnecessary characters that serve little or no purpose in the movie. For instance, I’m yet to understand the role of Joke Silva and Taiwo Ajayi Lycet in it.

Although they are put at Special Appearance category, which I feel it’s might be for marketing purpose.

For the dialogue part of the movie, I really appreciate the fact that our indigenous Yoruba Language was used. However, the part where the Eleshin Oba himself played by Odunlade and Iyaloja had to have serious conversations with the English Colonial Master In their Indigenous Yoruba and while the white man responds to them in English thereby creating an impression that both white man and Eleshin Oba and Iyaloja would fully comprehend one another almost ruined the movie.

Odunlade Adekola in his usual arty self, gives sterling delivery to the lead character as well as Brymo. In my wildest imagination, I never thought Byrmo could speak Yoruba with flawless Oyo dialect. Bravo to brymo, he equally kills his role.

The Iyaloja played by ShaffyBello delivers her role excellently however, her Oyo dialect seems too mechanical for a supporting role.

Cinematography is on point! You all can go see it.

Kudos to all the cast and crew!