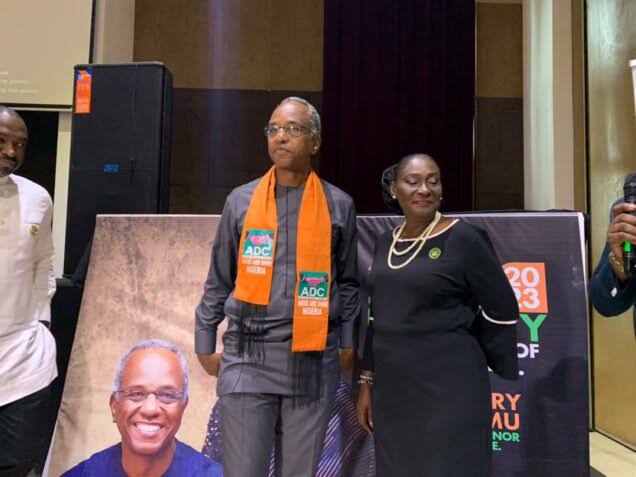 Funso Doherty, the Lagos State Gubernatorial candidate of the African democratic Congress and the state
chapter of the party officially unveiled his running mate- Barrister Rosemary Giwa Amu in Lagos on the 9th of September, 2022 at D’Podium Event center, Ikeja.

The emergence of Barrister Rosemary Giwa Amu reveals a clear preference for Integrity, equity and justice in leadership and governance.

His running mate, Barrister Rosemary Giwa Amu is a long-standing resident of Lagos who was born in present Ekpoma, then B.L. at the Nigerian Law School Victoria Island Lagos. She subsequently obtained her L.L.M (Hons) at the University of Lagos, Akoka.

Barr Giwa-Amu worked with the Federal Inland Revenue Service as an Inspector of taxes in Lagos and was subsequently appointed as a magistrate with the Lagos state judiciary in 1995 where she proceeded to have a distinguished career.

As a magistrate in Lagos, quick dispensation of justice was her watch word, always with equity and proper application of the law at the back of her mind.

Barrister Rosemary Giwa-Amu is a hard worker. While on the bench, she received a letter of commendation from the Ministry of Justice in recognition of her productivity in rulings and judgements.

Since leaving the judiciary, Barrister Giwa-Amu has been involved in several NGOs.

She is a self-described human rights activist, one who is passionate about the care, counsel, and an encounter with the justice system.

Giwa-Amu while giving her acceptance speech said “Today is unarguably the most exciting moment of my sojourn in Lagos where I have lived for over 39 years. And this, for the obvious reason that it marks the beginning of a huge opportunity in my life to demonstrate my long-held vision of greater involvement in the building of Lagos State.”

She added that being given an opportunity to serve in Deputy Governor capacity alongside a great man like Funsho Doherty is a call to service.

“This very important Call to Service is therefore a great opportunity for me to contribute to turning things around. In this, I am aligning very closely with the commitment and determination of my Principal, Funsho Doherty, a man with Lagos deeply etched in his very DNA, to develop and progress Lagos State to its full potential.

“We will together work assiduously to restore the State to its old glory as a Center of Excellence, tapping on the huge potentials of its diverse peoples, and its abundant but currently latent resources, she said.