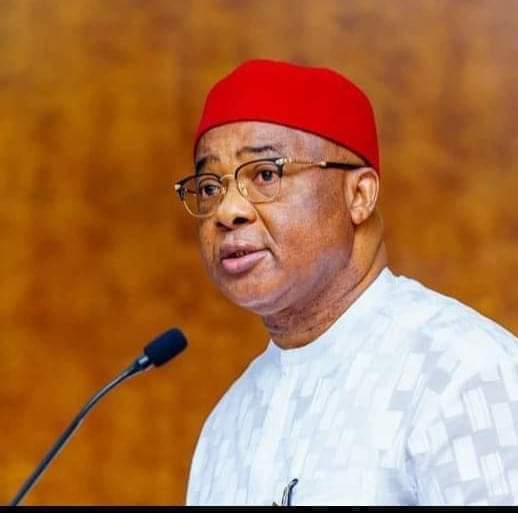 Governor Hope Uzodimma of Imo State has granted a 10-day window to bandits operating and hibernating in the forests in Imo State to leave the place immediately and surrender themselves and their arms to their traditional rulers for unconditional pardon or face bombardment if they fail to do so.

In a Press Statement signed by Chief Press Secretary and Media Adviser to the Governor, Oguwike Nwachuku earlier today says the 10-day amnesty grace by the Governor is with immediate effect and will be visited with severe consequences if not taken seriously by the bandits.

Governor Uzodimma who also spoke at the Government House Chapel Owerri while addressing the congregation after Sunday Service said that government has decided to rid the forests in Imo State of bandits and accordingly, has procured the necessary equipment for the purpose, hence the need for those of them who want to be reintegrated into the society to take advantage of the amnesty and quit now and hand over their arms.

The Governor also said that Imo State will be hosting the annual Army Day Celebration from June 30 to July 6,  2022 and that no fewer than 10,000 military personnel drawn from the Army, Navy, Air Force, the Police,  among others  would be in attendance.

They would be led by the Army Chief, the Naval Chief,  the Air Force Chief, the Police Chief, among others, according to the Governor.

President Muhammadu Buhari who is expected to declare open the Army Day celebration has also fixed July 12 – 13 as the period he would commission the Owerri-Orlu and Owerri-Okigwe roads as well as  perform the flag-off of the construction of Owerri – Mbaise – Umuahia (from Fire Service) and  the Orlu-Akokwa roads and the foundation laying ceremony of the Imo International Conference Centre in Owerri.

Governor Uzodimma said the new roads will still be handled by Cranburg.

While congratulating Imo people for the relative peace that has returned to the State, the Governor explained that effective Monday, June 27,  “Imo State will take delivery of military equipment that will be used to clear the remnants of bandits hiding in various bushes in the State.”

He however gave 10 days to bandits still operating under any cover in the forests to come out of their caves, “where necessary, report themselves to their traditional rulers or their Council Chairmen so that Government will grant them Amnesty.”

He emphasised that the period of grace will not be extended as those who fail to take advantage of it will have themselves to blame.

The Governor said: “The State is more determined now than before to clear all bandits and to achieve this, the expected equipment and additional recruitment of more Ebube-Agu personnel working in collaboration with the Security Agencies in the State will be used to clear all the waterways and ride the state of bandits including crude-oil theft. All the waterways are under surveillance with the delivery of new Naval Equipment to the Naval Base in Oguta.”

Governor Uzodimma further directed the Interim Management Committee Chairmen of the 27 Local Government Areas in the State and the newly inaugurated 52 Coordinators of the Development Centres to resume fully in their headquarters and cooperate with their members and the Town Union President Generals to drive the Government message on security home.

Furthermore, he reiterated his assurance that the LGA elections will be conducted this year, adding that the ISIEC had been asked to resume the process towards the election.

Governor Uzodimma promised that “the election will be transparent, free and fair and only popular candidates will contest and win.”

The Governor told those aspiring to contest to go and sell themselves to their people instead of coming to loiter around the Government House Owerri seeking for endorsement they will not get.

He said his administration will like to leave behind a strong Local Government System that will stand the test of time.

The Governor thanked the congregation and the people of Imo State for their continued support for his administration, noting that “those who thought that they will destabilise the State have failed and will continue to fail.”