ActionAid urges Nigerian lawmakers to have a rethink on Gender Bill! 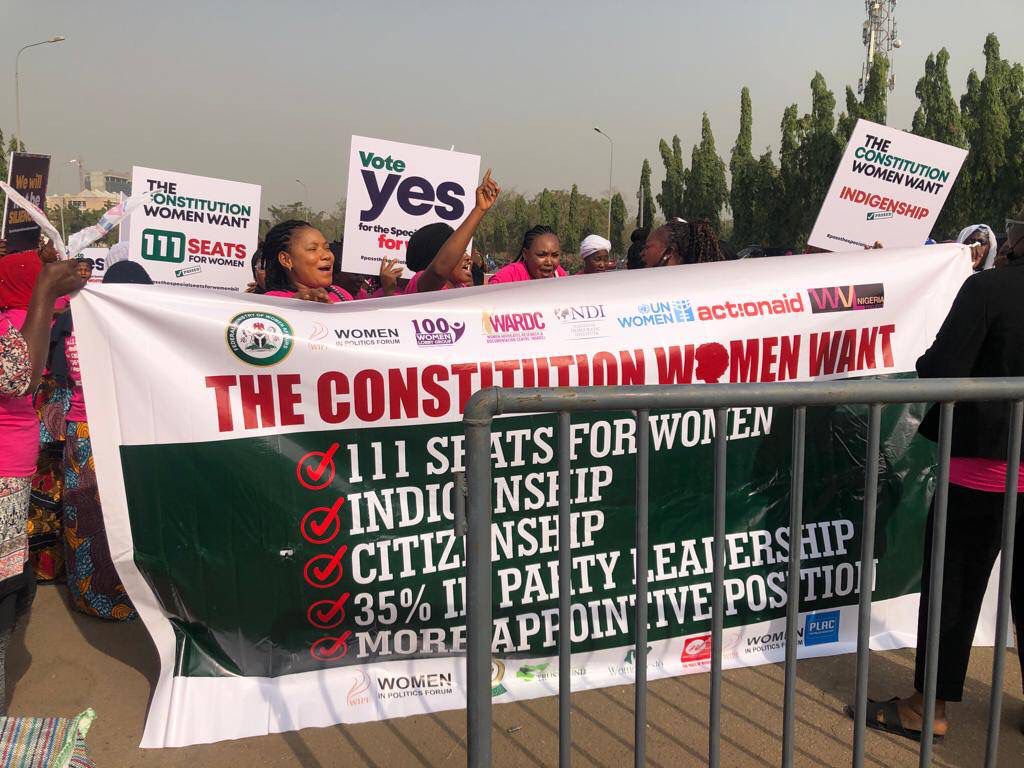 Yesterday, all roads leading to the National Assembly in the Federal Capital Territory, Abuja were blocked by the Nigerian Women as they determined to break the age-long Constitutional bias against the women in Nigeria particularly at the decision making level.

The women, in their demands made it clear on the need for the government of the day to reverse the trends that have continued to relegate to the background, the invaluable contributions of women to nation building and national development.

Some these issues are rejection of gender bill at the Parliament, low representation in the Parliament, party leadership, and low female appointees at the strategic key positions in government amongst others

Earlier, in a Press Statement signed and issued by ActionAid Nigeria had demanded that the 9th National Assembly to have a rethink on the rejection of Gender bill.

“Nigeria women are disappointed and aggrieved at the actions of the 9th National Assembly (NASS) today Tuesday March 1, 2022 when they denied women the opportunity of inclusion and representation in governance by voting against the gender bills. The NASS has spoken loud and clear that they do not want progress for society: for mothers, aunties, sisters, wives, and for daughters”, Statement said

It is particularly sad that in a month globally dedicated to celebrating women worldwide, our NASS has chosen to deny women basic human rights. These are rights enjoyed by every Nigerian except women.

ActionAid Nigeria added that the proposed gender bills in the 5th Constitution Alteration Bills that were all rejected are Bills targeted at addressing the current gender imbalance across the legislative arm of governments across the country whilst reducing the under-representation of women in political office.

Nkechi Ilochi-Kani, ActionAid Nigeria, Director, Women’s Rights Programme who spoke to our Correspondence registered her displeasure about the outright rejection of Gender Bill by the 9th National Assembly.
She said such rash decision by the Nigerian Parliament has got Nigerian Women furious.
“It’s like telling them they are nothing but second class citizens in their own country”.
“By Constitution, we are all equals, so why are they trying to stifle our Rights buy ruling out gender equality Bill?

“Look at what is happening in Nigeria today, ever since men have been ruling us everything have gone south! We Women need a change of status quo in every sphere and it must happen” she said.

Niri Goyit, ActionAid Project Coordinator for Women Rights who also spoke said Women’s participation and representation are quite critical to National development anywhere in the world.

“Look at what is happening in Kenya and Rwanda today. These countries have given Women the opportunities to play their roles in the scheme of things and they are better for it.

“It is high time Women took our rightful position in Nigeria and turn things around. We don’t want 20% percent representation we demand our full 35% in government.” She said.