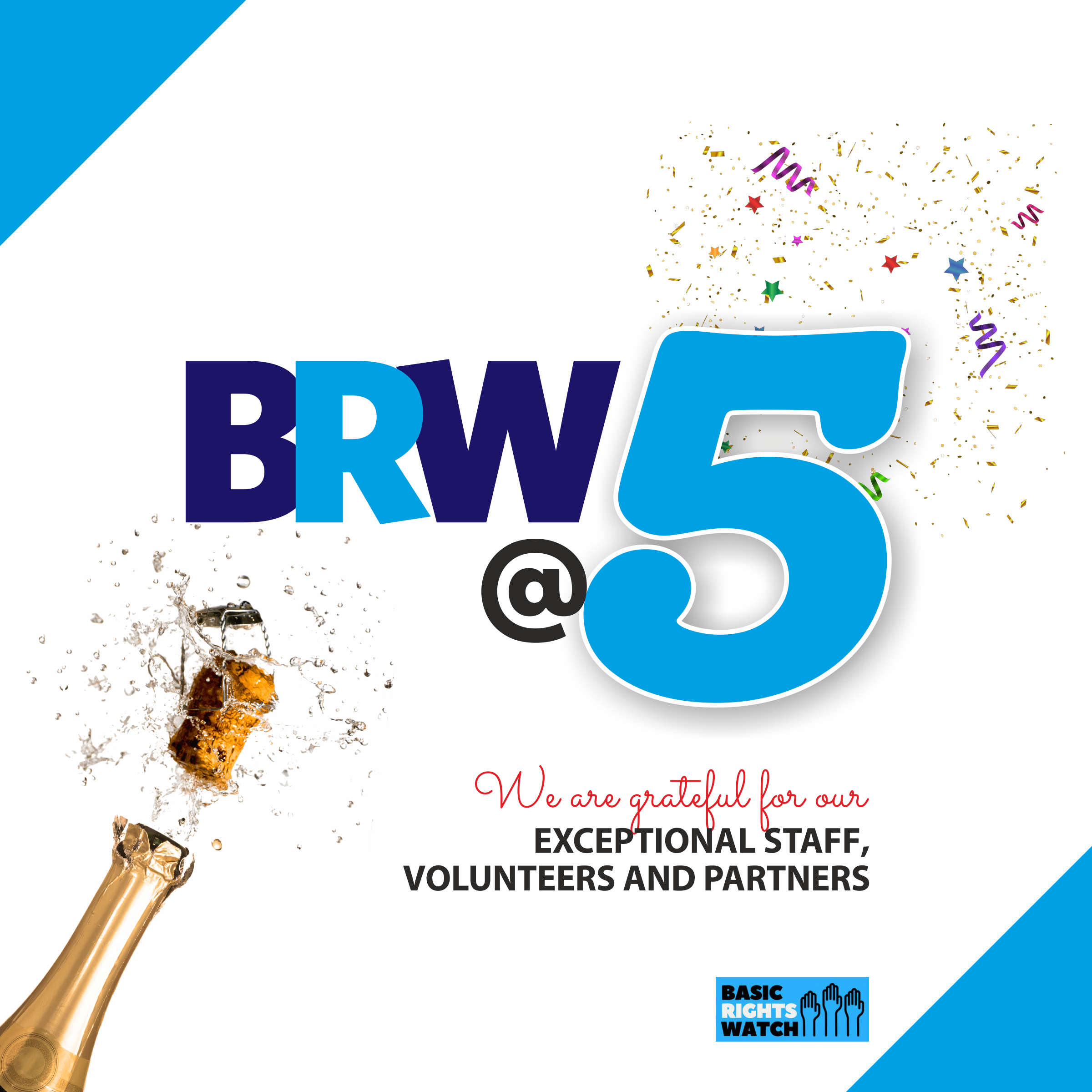 Basic Rights Watch (BRW), a Nigeria-based non-governmental organization (NGO) with a mission is to leverage open data, disruptive ideas and digital technologies to enhance popular participation and political accountability has celebrated its five years of commitments to advocating for basic human rights in Nigeria and across Africa.

In a Press Statement signed and issued over the weekend in celebrating this milestone by the Executive Director, BRW, Austin C Ekwuruju, highlights several success stories, positive impacts and achievements of the organization since inception in 2016.

Around the world, the 21st century was hailed optimistically as the century of democracy and good governance. This was particularly true for Nigeria as military dictatorship gave way for civilian rule. This signalled hope and a new beginning. However, in the last few years; multiple economic recessions, fraudulent electoral outcomes, governmental attack on civil space, insecurity and a devastating global pandemic have challenged this optimism and somewhat injected large scale disillusionment among citizens.

In Nigeria, following the banning of Twitter operations, the civic and political square has shrunk. The persistent and condemnable arrest and/or disappearance of journalists lays bare the weakness of democratic institutions, especially free speech or press freedom and implicates the surprising appetite for authoritarianism. In all these, civil society organizations continue to face challenges that threaten their existence through restrictions in terms of legal and regulatory frameworks and severe violence against political activists and human rights defenders who are demanding transparency, accountability, freedom, equality, and justice.

Nonetheless, CSOs have also witnessed reinvigorated use of social media to facilitate collective action, and civic networking that goes beyond formal organizational structures. The popular protest against police brutality and demands for a reformation of the Nigerian Police Force (NPF) are perfect scenarios.

Accordingly, in the last 5 (five) years, BRW has recorded tremendous achievements and has emerged as a frontline organization advocating for the expansion of the public sphere for wide-range public participation and citizen engagement in Nigeria. On good fiscal governance and effective public service delivery, particularly in such sectors as education, health and agriculture; BRW is leading civic efforts (activism and advocacy) for strengthening budget and procurement performance both at national and sub-national (state) levels.

Fundamentally, BRW has played a key role in implementing the Open Government Partnership (OGP) through insistence for transparent budgetary processes, timely and unrestricted access to fiscal information as provided by the Freedom of Information Act (2011). Empirically, BRW has remained consistent and committed to the annual launch of the Freedom of Information (FOI) Transparency and Compliance Ranking that assesses Ministry Departments and Agencies (MDAs) and security sector on the level of compliance to the provisions of the FOI Act.

Furthermore, during the disbursement of emergency COVID-19 funds and palliatives, BRW was committed (against the odds) to galvanising and amplifying citizens’ voices and calling that poor and vulnerable groups, especially in rural areas, should not be left behind in accessing available packages. Working with other CSOs in the ecosystem, BRW insisted on transparency and accountability in all disbursements and called for responsible application of benefits by beneficiaries.

Throughout the periods of complete or partial lockdowns, BRW was in the trenches making sure that relevant information were available and accessible to citizens, most especially for those on the fringes of the economy – poor and vulnerable groups. Crucially, we believe in the resilience of civil society and independent institutions as prerequisites in achieving good governance and democratic consolidation.

As a testimonial or reward for our efforts and contributions, BRW won the 2020 FESmedia AFRICA Award. We most humbly dedicate the honour to active citizens working to place citizens’ demands at the heart of policy agendas in Nigeria and the entire African continent.

Earlier on in 2016, BRW started advocacy for the Federal Government (FG) to capture allocations to Tertiary Education Trust Fund (TETFUND) in the national budget in order to encourage fiscal responsibility, while calling for open government in the financial spending of tertiary educational institutions For five (5) years, BRW engaged with respective organs of the government and MDAs and we are glad to inform Nigerians that the 2022 appropriation bill captured the sum of NGN 306 billion for TETFUND. This is the first time in Nigeria’s history that allocations to TETFUND will be made public and unambiguously published on the national budget for citizens’ scrutiny and consumption.

In addition, Nigeria accounts for 45% of all out-of-school children in West Africa, with over 10 million out-of-school children. In the pool, girls account for 60% of Nigeria’s 10 million out-of-school children, experiencing consequences such as child marriage, multidimensional deprivations and poverty, and discriminatory social norms. It’s on this premise that BRW has monitored and tracked basic education funds on the national budget worth over five hundred million Naira (NGN500,000,000) in selected schools across the country. These projects cut across infrastructural developments, furniture and special interventions designed to enhance the quality of education in Nigeria. BRW has also successfully advocated for, and called for the government’s attention in fixing 20 dire social infrastructure in 10 communities in Nasarawa and Plateau States.

As COVID-19-induced lockdowns also triggered an explosion of gender-based violence (described as Shadow Pandemic) among rural and urban households, BRW in response is uniquely engaging with the 2021 global 16 Days of Activism against Gender-Based Violence. The aim is to educate more Nigerians, especially young people and women, about their sexual and reproductive rights as a way of reducing the incidence and severity of SGBV among marginalised and deprived populations.

To these successes, impacts and achievements, it is our belief that a healthy democracy depends on a robust and autonomous civil society that is able, ready and prepared to defend fundamental human rights, speak up against abuses and provide effective public oversight on government spending amongst others. Although we face obvious challenges in the polity, our resilience to democratic principles is a triumph of the human spirit that democracy towers as the most accepted or legitimate political arrangement because it preserves the will of the people as the supreme form of civil authority. We call on public-spirited Nigerians and the donor community to support our activities/projects for scalability and sustainability.

Finally, we are grateful to God for the journey so far and the Nigerian Government to renew their commitment and increase investment in key sectors of the economy. Investments in school age children, most especially girls, have the highest returns in tackling future gender inequalities and it guarantees the education they deserve that leave no girl behind. If we don’t prioritize education now, Nigeria will risk losing hard-won progress we have made and sacrificing a brighter future for the future generation. The time to act is now!

As we celebrate we wish to thank some of our partners who have supported BRW over the years.