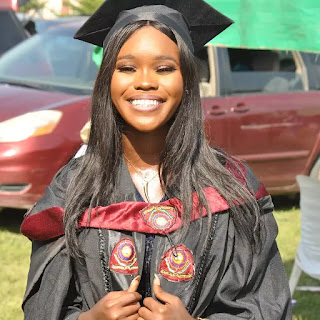 The young lady accomplished the feat at the recent convocation ceremony of Bowen University, Osun State .

A native of Umungwa Obowo in Imo State ,she was born in 2001,Yadirichi attended Lara Day Nursery and Primary School Adeniyi Jones Ikeja Lagos and Baptist High School Ijegun ,Lagos  for her primary and Secondary School before proceeding to Bowen University

An elated Yadirichi, who was the cynosure of all eyes at the convocation ceremony of the University recently attributed her success to the almighty God ,her parents and her ability not to lose focus throughout her stay at the University

Speaking on the feat , her father, CKN said he was highly elated but not totally surprised by her achievement because she has always exhibited an extra level of intelligence throughout her school days.

According to him ,she got admission to read Medicine in Russia at the age of 15 but he was a bit sceptical to let her go because I felt she was too young then .

She was so briliant that she secured secondary admission from primary four skipping two classes.

Asked what her next line of action would be , Yadirichi said she is planning to proceed for her Masters Degree and also PhD immediately after her current Youth Service