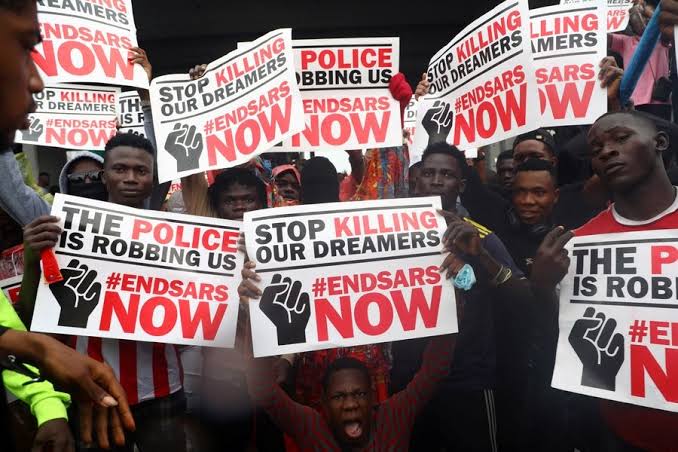 • Despite promises of reform police impunity goes on

Amnesty International has called on Nigerian authorities to put words into action and decisively end police impunity. Use of pro-government thugs to violently disperse and undermine peaceful #EndSARS protests must be thoroughly, independently, impartially, and transparently investigated and suspected perpetrators brought to justice in fair trials.

The organization made this disclosure at a Press Conference held in Abuja during the week to mark 365days of #LekkiToll Gate shooting at a peaceful protest to end police brutality in Lagos in 2020.

One year after peaceful #EndSARS protests ended in a brutal crackdown by Nigerian security forces in Abuja, Lagos and other parts of the country, no one has been brought to justice for the torture, violence, and killings of peaceful protesters, while reports of human rights violations by the police continues.

An investigation by the organization found that Nigerian army and police killed at least 12 people on 20 October 2020 at Lekki toll gate and Alausa in Lagos. Amnesty International was able to establish that pro-government supporters instigated violence at many of the demonstrations, providing cover for the police to use lethal forceagainst peaceful protesters. The organization also found that detained protesters were tortured and refused or denied immediate access to lawyers.

A year on, despite the gravity of these human rights violations, not a single member of the security forces has been prosecuted while judicial panels of inquiry set up to investigate abuses by officers have made little progress.

“President Muhammadu Buhari must fulfill his promise of reforming the police to end the reign of impunity Nigerians have been protesting against for many years. Failure to bring to justice those suspected to be responsible for the torture and killings of #EndSARS protesters on 20 October 2020 is yet another indication that Nigerian authorities lack the political will to ensure accountability for these atrocities, and end police brutality,” said Osai Ojigho, Director of Amnesty International Nigeria.

“Under the pretext of restoring order, horrific injuries were inflicted on hundreds of people and at least 56 people were killed, among them dozens of young people lost their lives as Nigerian security forces used unnecessary and excessive force to disperse peaceful protesters across the country. It is unacceptable that despite overwhelming evidence, the government continues to deny the use of live ammunition on protesters at Lekki toll gate exactly a year ago.”

Amnesty International had documented incidents at Lekki Toll Gate Lagos and other parts of Nigeria, showing the violent response of the Nigerian security forces to peaceful protests. The clear aim of the crackdown was to instill fear, discourage peaceful protests and punish those demanding an end to widespread human rights violations by the police.

Use of pro-government supporters to whip up violence

While most of the #EndSARS protesters were peaceful, there wasviolence, mostly instigated by pro-government supporters.

After reviewing videos and photos of the protest sites, Amnesty international found that in nearly 21 incidents where violence occurred between peaceful protesters and pro-government supporters, security forces not only failed to take preventive measures to avoid peaceful assemblies from being disrupted, but they also failed to protect protesters from violent attacks.

“In many instances, the police and other security agents watched as apparently government-backed armed thugs attacked peaceful protesters. In some cases, these thugs were brought to the protest sitesin government vehicles. On at least two occasions, these attacks resulted in the death of protesters,” said Osai Ojigho.

Excessive use of force

Almost every person arrested during the protests described being beaten with the butt of a gun, whips and fists during their arrests. According to the Committee to Protect Journalists (CPJ), at least 12 journalists were attacked during the #EndSARS protests by security forces and unidentified perpetrators.

Amnesty International also documented numerous cases in which police denied or delayed access to lawyers and medical care to detainees. This was despite repeated requests from detainees to see or call a lawyer – and repeated requests from lawyers at places of detention to have access to the detainees. Several lawyers and human right defenders said they spent days moving from one police station to another trying to find out where those who had been arrested were being held.

One person arrested during a protest on 18 October 2020 and held at Lagos state Criminal Investigation Department (CID), Panti, said he repeatedly asked to call a lawyer. He was told by a police officer to shut up. While in detention, he was denied access to a lawyer whohad come to see him and was unable to meet with a lawyer until a week after being arrested.

Providing timely access to lawyers is an important safeguard for many human rights, such as the right to a fair trial and ensuring the detainee’s rights are respected in custody, including the right to access medical care when needed, as well as protection from coerced confessions and torture and other ill-treatment.

Investigative panels set up to look into police brutality have so far been marred by prolonged adjournments, intimidation of witnesses by police lawyers and the failure of police officers to appear as witnesses, according to observer reports verified by Amnesty International. Panels have failed to sit in some states, and in others have gone on an indefinite break.

“What we observed at these panels is discouraging and clearly shows there is no real commitment to ensuring justice for victims of police violence across Nigeria. These panels raised hopes of getting justice but in some states, this is quickly vanishing,” said Osai Ojigho

Nigerians must not be denied the constitutionally and internationally guaranteed right to peaceful protest. All those detained or missing since the #EndSARS protests must be immediately released or reunited with their families. Nigerian authorities must ensure access of victims and their families to effective remedies, including adequate compensation, restitution, and guarantee of non-repetition.

“The #EndSARS movement was met with the same use of excessive force by the police it was set to fight against. It is time for the authorities to ensure accountability and end impunity for police violence in Nigeria,” said Osai Ojigho.