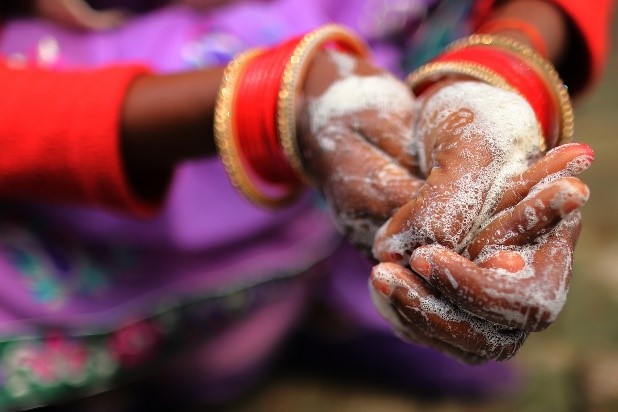 Just 10 days of smartphone sales would cover the $11billion cost of ensuring everyone in the poorest countries could wash their hands with soap and water at home by 2030, WaterAid said today.

A new report by WHO and UNICEF, released today on Global Handwashing Day, reveals that giving everyone in the world’s poorest countries access to handwashing with soap and water, would cost around $11 billion. That would transform the life-chances of people who are currently unable to simply wash their hands at home.

Millions of lives could be saved and billions of dollars in untapped economic potential could be unlocked for the equivalent of just $1.40 per head of the global population, says WaterAid.

As G20 leaders prepare to gather in Rome to improve pandemic preparedness, WaterAid warns that government investment must be made to provide handwashing for all as it plays a critical role in the fight against preventable diarrhoeal diseases and respiratory infections.

According to latest estimates from WHO and UNICEF, three in 10 people worldwide cannot wash their hands with soap and water at home, and at current rates of progress, 1.9 billion people – families and children – will still be unable to do by 2030.

WaterAid’s own recent analysis in its Mission Critical report, concluded that trillions of dollars could be unlocked over the next two decades through universal access to water, sanitation and hygiene. Achieving this could generate a net benefit of $45bn per year, and even just providing a tap in every household could yield $37bn USD annually.

WaterAid warned today that progress is worryingly slow. For everyone to be able to wash their hands at home by 2030, one of the UN’s Sustainable Development Goals, governments need to make progress at least four times faster than they currently are. However, the economic value of handwashing for all, alongside water and sanitation services, is vastly underestimated by governments, businesses, and donors, resulting in chronic under-investment.

Investing in water, sanitation and hygiene brings multiple wins for governments, WaterAid says: it is value for money, it helps achieve health targets and it increases productivity to support economic growth. If governments invested in even basic water, hygiene and toilets it would bring a return on investment of up to 21 times the cost.

The provision of basic water services could save women and girls the equivalent of 77 million working days per year that they currently spend on fetching water, increasing their life and work options and greatly contributing towards gender equality. Good hygiene can reduce diarrhoeal and respiratory diseases at low cost, improving people’s health, reducing the costs of healthcare and freeing up people’s productive time.

Achieving universal access to hygiene services by 2040 could prevent 96 million cases of diarrhoeal disease and 160 million respiratory infections each year. This equates to less than $10 USD spent to avoid each case. According to WaterAid’s research, this could save up to $39 bn in lost productivity.

“Investing in soap and water is a clear ‘no regrets’ investment, in homes, health care facilities and in schools. Covid recovery and the preparedness for future pandemics cannot happen without it. Smart choices made by governments could play a vital role in ensuring a prosperous future, a healthier population, and a functioning society.

“In a previous report, Equal to the task: financing for a state of emergency in water supply, sanitation, and hygiene, WaterAid analysed the financing challenges plaguing Nigeria’s WASH sector and based on research and analysis, estimates the total cost of achieving SDG6 in Nigeria to be US$2.1 billion a year in capital, operations, and maintenance. With current public spending, from both government and donors, at only $393 million, there is a massive annual financing gap to address.

In Nigeria, a staggering 167 million people (84% of the population) lack basic handwashing facilities, 112 million people (56%) do not have access to basic sanitation, and 60 million (30%) do not have access to basic water supply. At current rates of progress, Sustainable Development Goal (SDG) 6 – achieving universal access to safe water and sanitation – will not be met until decades after the deadline of 2030. To get progress on track, the government, businesses and donors must appreciate the value of achieving universal access to vital WASH services and expedite actions that ensure sustainable WASH for all.

“Handwashing promotion is proven to be cost-effective. Investments in health, education, and improved water supply are all jeopardised if handwashing with soap is not included in the overall plan. Governments should not wait for another crisis to hit the nation before investing wisely in the health and well-being of its people and the resilience of its economy”.

Claire Seaward, WaterAid’s Global Campaigns Director said: “As the G20 prepare to gather, it’s time governments and donors pay attention to the fact that an investment in water, sanitation and hygiene is a life-saving investment in future health and economic prosperity. These simple, but essential facilities have been side-lined for far too long, their value overlooked, crippling economies and trapping millions – especially women and girls – in poverty and poor health.

“Now is the time for action. Governments need to kickstart behaviour change, set out clear roadmaps for achieving hand hygiene for everyone by 2030, and ringfence the financing to achieving it. Partnerships with businesses will be crucial to strengthening supply chains for hygiene products and services. Donors need to rapidly increase their financial support in low and middle-income countries, recognising the critical role that hand hygiene has in pandemic preparedness and addressing anti-microbial resistance.”