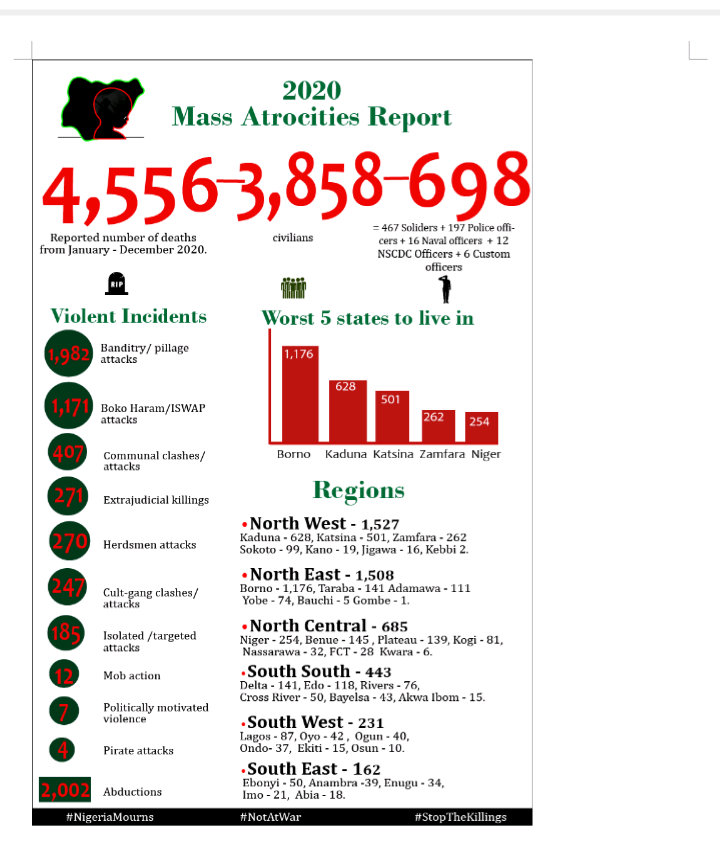 Global Rights, an International Human Rights organization has released yet another shocking Mass Atrocities Report for 2020 showing 4,556 Nigerians lost their lives through one violent crisis or another in the year, which according to the report, was a glaring spike of 43% compared to 2019 Mass Atrocities Report with only 3,188 deaths recorded.

According to a Press Statement issued by the organization earlier this week, ” Our tracking of mass atrocities across Nigeria for 2020, (indicated through casualties of violent attacks, clashes, terrorism, kidnappings, and extrajudicial killings) informs that at least four thousand, five hundred and fifty-six (4,556) lives were lost between January and December 2020. A glaring spike of almost 43% in the number of casualties in comparison to the 2019 figure of Three thousand, one hundred and eighty-eight (3188)”.

“Of the above number, three thousand, eight hundred and fifty-eight (3,858) were civilians, while 698 were state security agents. For the second year running, for every 5.5 deaths recorded, at least 1 of them was of a security officer.”

“Kidnappings were a recurrent decimal across the country. Other forms of atrocities included: arson, community displacements, forced evictions, extrajudicial slum demolitions, security force brutality (often accompanied by arbitrary arrests), incursions on the civic space, especially the brutalization of protesters, enforced disappearances, violent gags on media freedoms, and a spike in gender-based violence precipitated by impunity and disproportionate state responses. As a matter of fact, nearly all of the atrocities recorded were engendered/ perpetuated by cycles of impunity.” said Abiodun Baiyewu Country Director, Global Rights Nigeria at a Press Conference in Abuja

Baiyewu while expressing concerns for this current state of insecurity and impunity in the country stated that: “the patterns of mass atrocities across the country continued to bear regional nuances, but the lines are increasingly becoming blurred”.

“Insurgency, pillages, and communal attacks characterized the major forms of atrocities in the North, while the South struggled with rival cult-gang attacks, extrajudicial killings, politically motivated killings, and mob lynching as well as incursions on the civic space, especially the brutalization of protesters, enforced disappearances, violent gags on media freedoms, and a spike in gender-based violence precipitated by impunity and disproportionate state responses. As a matter of fact, nearly all of the atrocities recorded were engendered by impunity.” she said.

In stemming this horrific tides, the organization through the statement has urged the Federal Government of Nigeria to: