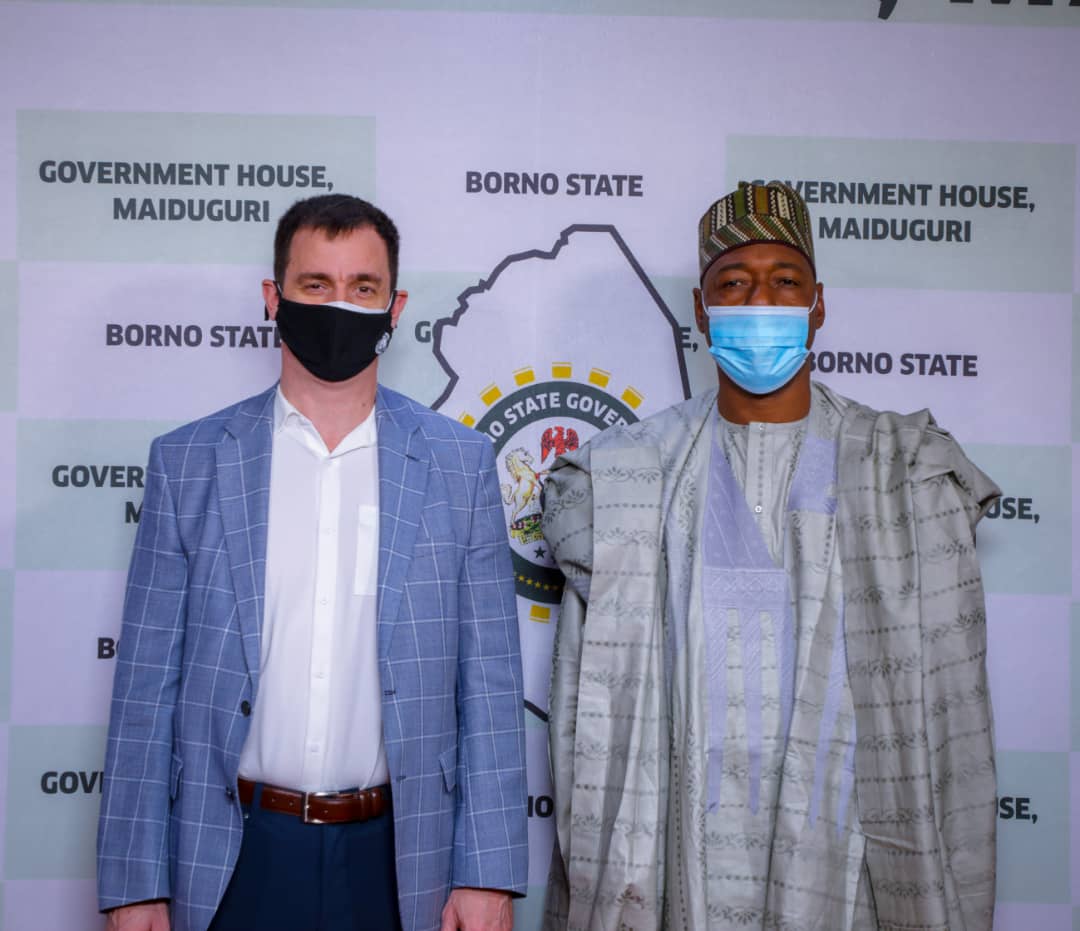 The United Nations under Secretary-General for Safety and Security, Mr. Gilles Michaud was in Maiduguri, Borno State on Tuesday, for on the spot humanitarian needs assessment, and to meet the state Governor, Prof. Babagana Umara Zulum.

Mr Gilles who paid a courtesy call at the government house, said Governor Zulum had built a high reputation, which he said many people in the UN were discussing amongst themselves.

“I have heard alot of good things about you, your reputation precedes you. We see the proactive vision that you execute here in Borno State. You can count on our continued support (at the UN) for your efforts” the UN undersecretary told Zulum.

He explained that his visit was to oversee humanitarian activities undertaken by agencies of the UN in different parts of Borno State, in line with needs of persons affected by insurgency crisis.

In his remarks, Governor Zulum thanked the Under Secretary for his visit and praised the UN for the far reaching contributions of its agencies.

Zulum, however raised concern on issues of accountability by some of the NGOs operating in the state.

“There are alot of leakages in the system, we are not getting maximum benefit. The volume of money that has been sunk to the entire northeast by donor partners in the last ten years can resolve most of our problems.”

“We need to know who are working and where, you are coming to Borno, we need to know who you are, what are you doing, but they don’t want us to check them. There are hundreds of INGOs, some of them are not genuine. We need to tame down and know exactly who are the right ones” Zulum said.

“We appreciate the support from all our partners, it is unfortunate some of the partners are working on their own without recourse to the government, without recourse to the people. Coordination is very important, you can’t solve the problem you do not understand, we need to work together. We know our problem better than anyone” the governor added

Zulum noted that “there are a number of good humanitarian actors especially the UN agencies like UNDP, the UNICEF, UNHCR and host of other development partners like the EU”.

The Governor spoke about his administration’s resettlement drive, highlighting areas the state government and UN can collaborate to ensure safe and dignified return of internally displaced persons back to their communities.

“We want to see that our people earn their means of livelihood, we have been receiving tremendous humanitarian support, but is not sustainable. Keeping them in the IDPs camp will expose the younger ones available for recruitment by the insurgents” Zulum said.