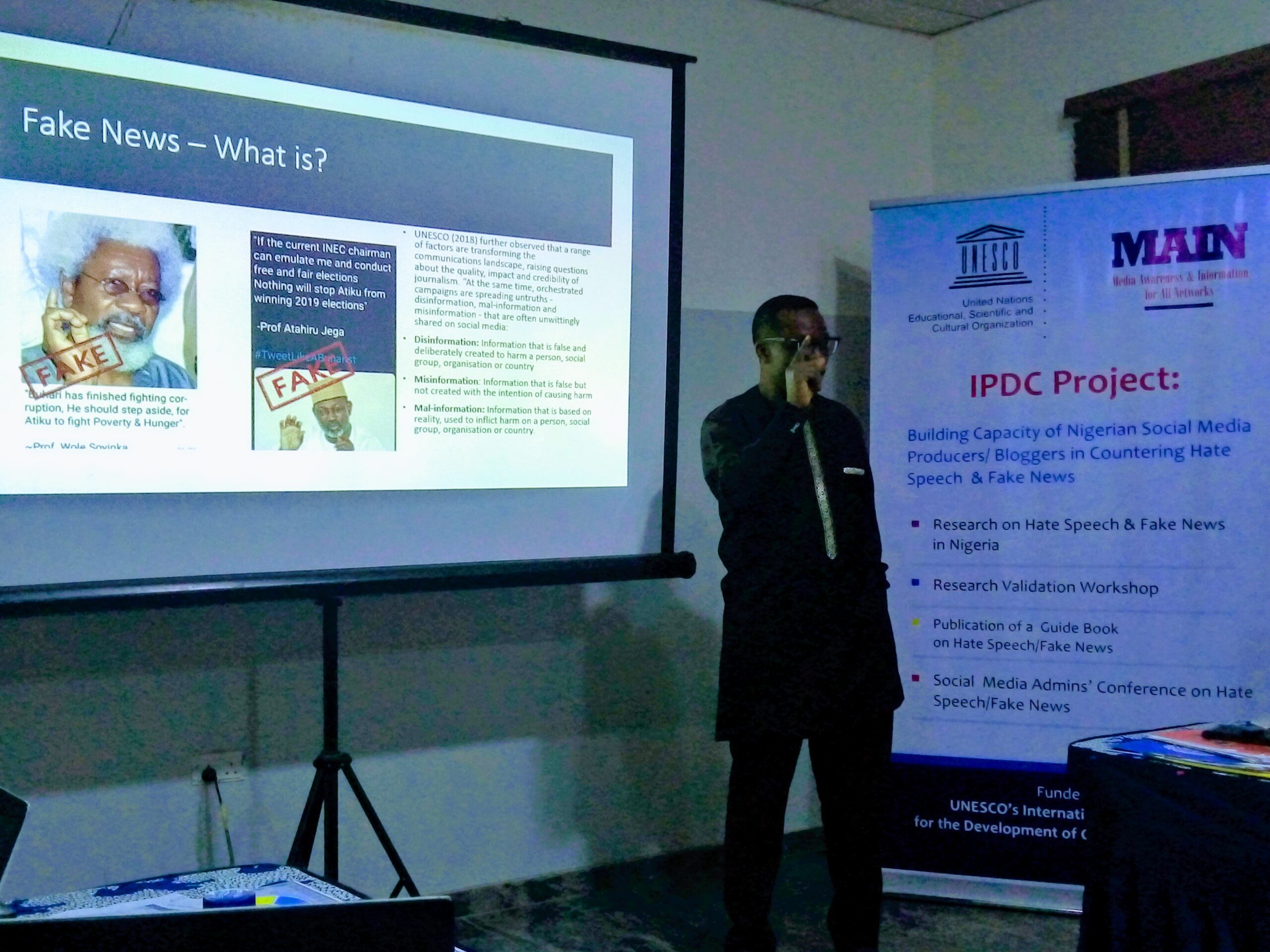 With the alarming rate at which fake news and hate speeches are being peddled in Nigeria and across the globe, particularly with the advent of 21 century digital media and its attendant effects on political landscape, socio-economic development, religion, ethnic divide as well as well-being of the readers and audiences, United Nations Educational, Scientific and Cultural Organization (UNESCO) and its partner organization Media Awareness and Information for All Network (MAIN) has advised the digital media practitioners in Nigeria such as Bloggers, Social media Influencers, YouTubers, Vloggers to shun the dissemination of fake news and hate speeches in the course of their works.

UNESCO and MAIN gave this advice at a 2 day capacity building workshop for the Bloggers and Influencers held in Abuja, between 12-13 October 2020.

Speaking at the Training, Regional Head UNESCO Abuja, Mr Macaulay Olushola said that the capacity building has become imperative for the Bloggers in Nigeria so as to be well-informed and equipped in tackling the day to day challenges of dissemination of Fake news and hate speeches both of which have become tools in the hands of unscrupulous fellows to incite violence and misinformation globally.

Olushola further stressed the need for media and Information literacy for all media practitioners in order overcome the prevalent cases of disinformation and misinformation in this 21st Century particularly for the Bloggers and influencers many of whom may not have had formal training in Journalism.

“UNESCO is currently prioritizing Media and Information Literacy for everyone including the younger generation. As it has been considered a viable tool to combat misinformation and disinformation globally” he remarked.

Professor Lai Osho of School of Communication, Lagos State University, who also doubles as the Chairman of the Board for MAIN gave hands on training at the workshop on how Bloggers can distinguish between real/true news and fake news.

While also sharing the objectives of the workshop with the participants, he said the training was aimed at equipping the bloggers and social media influencers with skills and more knowledge on how important they are in the Nigerian society with regards to the kind of information they provide to the public.

He added that over the years, there have been concerns in terms of quality of information that bloggers and influencers provide and the implications of such information to our society.

Speaking on the Media and Information Literacy (MIL) Project by UNESCO, the Scholar stated that the Basic core of MIL is critical thinking on the information received.

“it is about being able to interrogate and question the information received before sharing or putting it out to the public as a media person or an individual” he said.

National Information Officer, United Nations Information Center, Dr Seyi Soremekun also shared valuable key points with the participants on How to combat fake news in the media at the training.

He advised that with the advancements in technology in communication, bloggers should be wary of deepfakes and bots generated information.

“There have been proliferation of robots (bots), applications and tools to invent stories that never happened with the use of deepfakes technology which could pose a lot of danger when such news are being disseminated without proper verification”. he said.