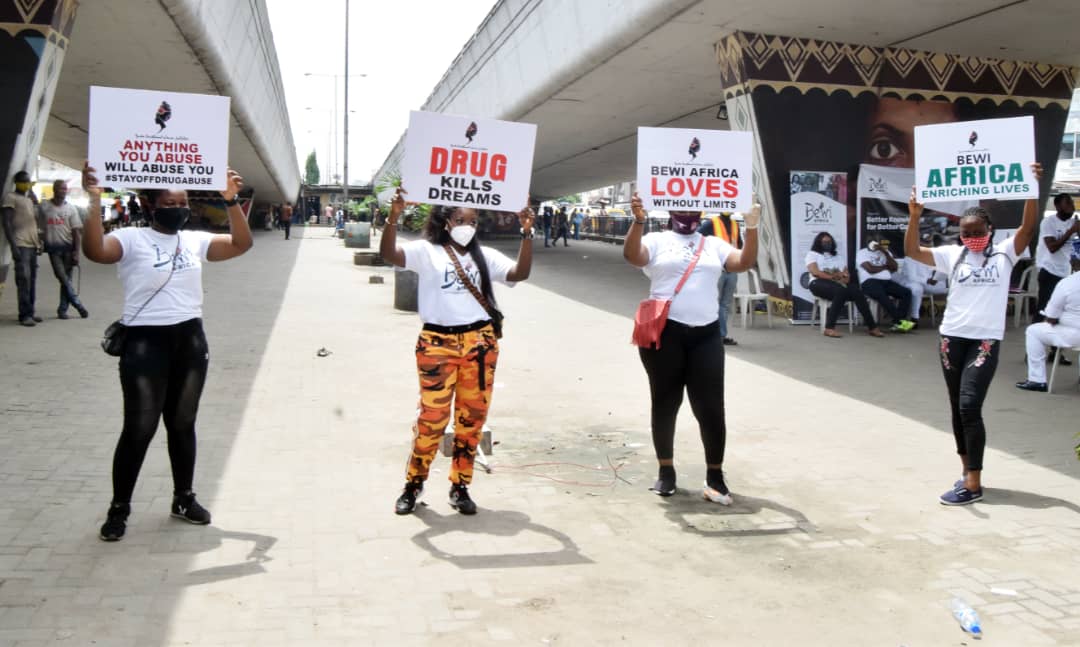 June 26th of every year is a day set aside by United Nations to raise more awareness against drug abuse and the illegal drug trade since 1989.

In commemorating this year’s International Day Against Drug Abuse and Illicit Trafficking, BewiAfrica, a not-for-profit organisation has embarked on a sensitisation programme on the devastating effects of drug abuse in Lagos. The awareness was borne out of the growing concerns over drug abuse amongst the teenagers in Nigeria and across the world.

According to BewiAfrica Founder, Ms Florence Hungbo, the NGO took it upon itself to sensitise the youths, especially college kids in the state, who have become entrenched in substances abuse and are mindless of its after-effects.

“We visited the youths and leaders in Fadeyi and Ojuelegba respectively with some entertainers and therapists to lecture the youths on the danger of drug abuse on their health and the future.

Drugs Kill Dreams, and this, we drummed home to the kids,” Hungbo said. She added that as countries and individuals fight to put a stop to drug abuse and its illicit trafficking, it is paramount for BewiAfrica to carry out more awareness/outreaches in areas identified having high cases of drugs abuse.

In Fadeyi, Mr Femi Akinboyeku, the transport unionist popularly known as J.Plum, condemned the abuse of any drug and also made it known that he doesn’t smoke or drink, yet, has achieved so much in his endeavour. “If I was doing drugs, I won’t be anywhere near where I have reached in my profession,” Akinboyeku said.

The Executive Vice Chairman, Somolu Local Government Council, Hon Bowale Sosimi, condemned drug abuse and congratulated BewiAfrica for this exceptional cause, which he said was the first of its kind for the youth of the area.

In Ojuelegba, the Deputy Chairman, National Union of Road Transport Workers, NURTW, Aransiola Qudus, popular known as Baresi thanked BewiAfrica for choosing Ojuelegba to create more awareness in drugs abuse and also advised the youths and leaders present to extend the awareness to others.

In her vote of thanks, the founder said the goal of the outreach is to strengthen global action and cooperation towards creating a society that is free from drug abuse and unlawful drug trade.

She appreciated everyone that took part in the event and promised to touch more lives and reach more places in the state and beyond.

BewiAfrica can be reached through the following medium