President Buhari visits Borno State, vows to beef up security against Insurgency in the State 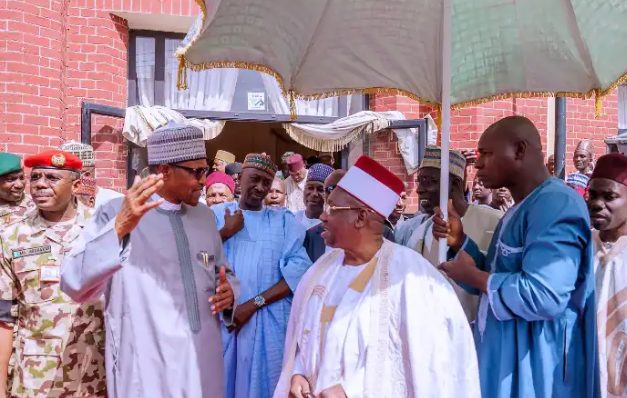 On Tuesday, President Muhammadu Buhari paid a visit to Borno State amidst insecurity challenges confronting the state in order to sympathize with the government and people of the State over the recent Boko Haram attack.

Mr President however, had disclosed through a tweet on his twitter page, same day, that he would continue to beef up security against the Boko Haram Insurgency and Terrorism in the State.

According to him “I assure all Nigerians that we are taking steps to ensure improvement in security, nationwide. In Borno the military will work harder to deal with the insurgents. I am also appealing to community leaders and the populace to give our troops the intelligence and cooperation needed”.

In another Tweet, made by current Hon. Minister of Humanitarian Affairs and Disaster Management, Sadiya Umar Farouq reveals that she was amongst the entourage of Mr President to the State. Her tweet reads:

Mr President during his visit, also made a courtesy call to the Monarch of Borno Land, Shehu of Borno. In his Palace, there were prayer sessions observed in honour of those who lost their lives in the recent Boko Haram attacks in the State.

May their Gentle souls rest in perfect peace.