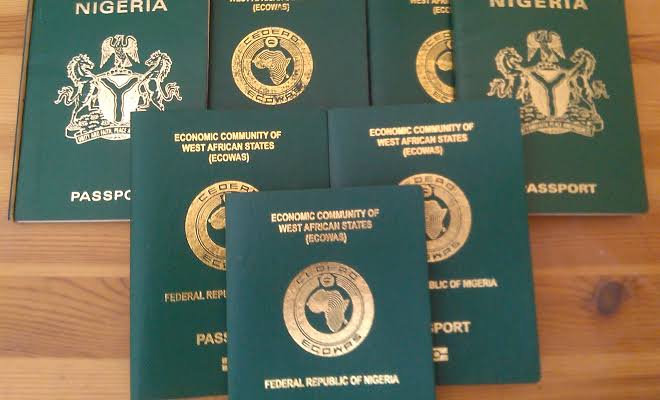 The latest Henley Passport Index (HPI) report regarding the world’s most powerful International Passport places the Nigerian passport at 95.

According to the list put together by HPI which occasionally curates a list of the world’s most travel-friendly passports, Nigeria is just above countries like Djibouti, South Sudan, and other war-torn countries in the middle-east.

In the recently published report, the Japanese passport is the most powerful in the world, as it avails those who possess it visa-free or visa-on-arrival access to about 191 destinations around the world.

The list also shows another Asian country – Singapore sitting in second place, with other European countries trailing right behind.

Though the largest nation in Africa and often called the giant of the continent, Nigerians still do not have it easy while travelling internationally.

Those who possess a Nigerian passport often experience difficulties going through a plethora of checks, many have often described as dehumanizing the way they were treated at the airports of other nations.

Every year millions of Nigerians leave the country’s shores some for pleasure visits, others for medical tourism and a lot more in search of greener pastures.

However, these trips are not all palatable as the Nigerian passport only avails visa-free or visa-on-arrival access to only 41 countries, with many having to struggle and pay through their noses to visit the highly developed nation.

The weakness of the Nigerian passport and the way Nigerians are treated when they travel is not unconnected with the nation’s battle with terrorism, fraud and other crimes.

In December 2019, Nigeria was added to a United States ‘special watch list’ of countries that had engaged in or tolerated the severe violation of religious freedom.

Boko Haram and eight other terrorist groups were also described as ‘Entities of Particular Concern’.

This in no way puts the nation and those who bear its passport in a good light, hence, one can tell where the unpalatable treatment meted out to Nigerians when they travel, stems from.

In recent times, the name ‘Nigeria’ had become very synonymous with fraud.

US authorities in August 2019, announced charges against 80 people, most of them Nigerians, in a wide-ranging fraud and money laundering operation that netted millions of dollars from victims of internet con jobs.

Federal prosecutors unsealed the dozens of indictments after 17 people were arrested and taken into custody in Los Angeles and elsewhere in the United States.

Most of the remainder of those indicted were believed to be in Nigeria.

With such a reputation, one cannot expect that many nations will be more skeptical about their interactions with Nigerians and those with Nigerian passports.

In an interview granted to the New Telegraph, President Buhari warned his fellow citizens to stop trying to make asylum claims in Britain, saying that their reputation for criminality has made it hard for them to be “accepted” abroad.

President Buhari said the number of Nigerians imprisoned for law-breaking in Britain and elsewhere, is the reason many are unlikely to get much sympathy.

Similarly, while addressing Nigerians in the Diaspora in Yokohama, Japan, Buhari said their actions should not reflect on the majority of Nigerians who are law-abiding.

He said there are few Nigerians in the Diaspora that are giving the country a bad name by engaging in criminal activities.

According to him, those Nigerians are a minority and do not represent the values of the country.

The President pleaded for those tarnishing the country’s name to change their ways, adding that his government will not condone any crime whether at home or abroad, and we will also not allow fraudulent Nigerians to define the nation as a people with reputation for criminality.

It is hoped that the fight against crime which is about the most important focus of the Buhari-led administration, will yield results which would see a turn in the value of the nation’s passport as well as a change in the