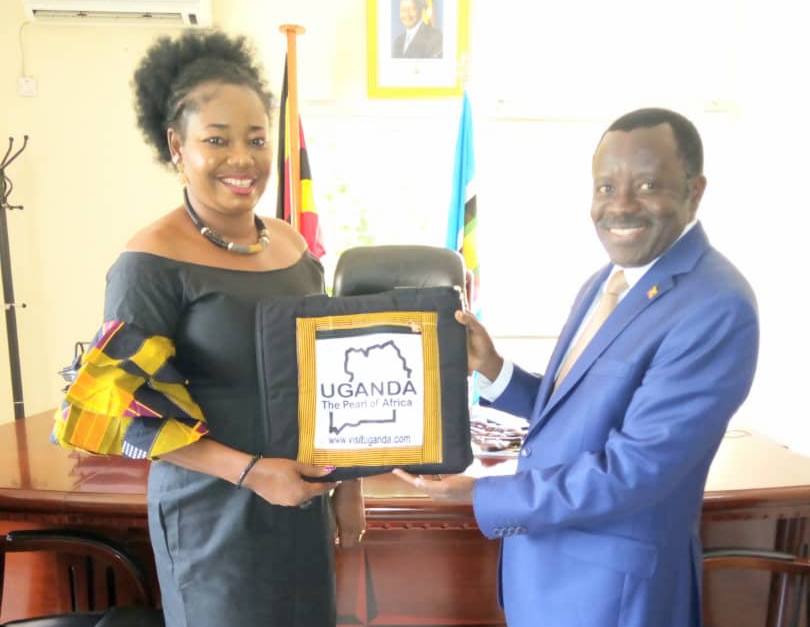 The crew of one of the popular Magazines in Nigeria, “Festivals and Tours Africa (FTA) Magazine has deemed fit to pay a courtesy visit to the Uganda High Commission in Abuja, Nigeria.

The visit remains a memorable one as the crew were received with an African hospitality by the Ugadan High Commissioner, His Excellency Nelson Ocheger, earlier this week.

The Team lead Festival and Tours Africa magazine, Princess Ayi Umo expressed the need to know more about the status and possible synergies with Uganda, with the aim of promoting intra-countries synergies amongst the other Africans states in achieving a bigger and formidable Africa.

HE Nelson Ocheger opined that there is no better continent like Africa that is richly blessed with resources that can never be found any where else in the world.

He noted that for the continent to be and function together as one strong continent we must realize the strong similarities in our cultural and down tone the disparities that seem to pull us apart if we don’t accept our cultures how do we encourage trade and investments?

“If we don’t accept and encourage initiatives like FESTIVALS AND TOURS AFRICA MAGAZINE our story will be told and published by strangers to suit their interest and motives,ignoring the truth of the situation, and also discouraging potential synergies from potential investors” he remarked.

Festivals and tours Africa magazine sought to know the Visa procedures of Uganda.

His Excellency Ocheger said getting visas was a two way the either online where you would be given a code that informs u are accepted and then a visa at the point of entry. The the physical Visa application where you could apply with a hundred dollars for a tourist Visa, plus the advantage of a tourist Visa it let’s you into three countries ,Uganda, Rwanda and Kenya.

Festivals and tours Africa magazine team was eager to know what was the Tourism and Trade attraction to Uganda?

HE Ocheger explained proudly Uganda was rich in games and natural reserves of endangered species of animals not found anywhere in the world but Africa, from Lions, Giraffes, Mountain Gorilla’s Elephants, Antelopes etc, he boasted of lakes, mountains, the peak of Mountain Rwenzori that had snow at the top all the seasons of the year,even though Uganda had two seasons wet and Dry seasons.

He mentioned that Uganda had large quantities of Rice,milk liquid and powdered, Tea,Tobacco, Wheat, coffee and more.

We, the Festivals and tours Africa magazine team were curious to know at what point Uganda as a country was in terms of women empowerment and inclusion in government.

HE Ocheger was very proud to share that Uganda had taken this the role of the women in development very seriously as far back as 1986, from then till 1994 when the constitution was rewritten, it was emphatic that the women and the youth where recognized as disadvantaged by sex, by history, tradition and ability, you may wish to know that Uganda is the first in the whole of Africa to have a female Vice President. Constitutionally not politically women have a 30% representation which can not be altered at all levels.

“Uganda recognizes and respects the roles of women in development and their inclusion cannot be tampered with but can only get better.”

“We also have women heading development banks, as CEOs head of various statutory bodies etc.We could say we proudly took the lead in East Africa and by extension Africa today others have followed suit including Rwanda”. he stated.

His Excellency Ocheger, concluded the conversation by saying “NO ONE ELSE EXCEPT AFRICANS WILL DEVELOP AFRICA, NO ONE ELSE EXCEPT AFRICANS WILL TELL THEIR OWN STORY. THERE ARE LOT OF POTENTIALS TO VISIT, GROW, INVEST, BUILD ITSELF. THERE IS NEED TO HARNESS THESE RESOURCES TO DEVELOP INFRASTRUCTURE IN AFRICA, THE ROADS, THE RAILWAYS AND WATER TRANSPORT. THE ONUS IS ON US EACH AND EVERY ONE, BOTH PUBLIC AND PRIVATE TO PLAY OUR RIGHTFUL ROLES”. This is a call to action for all Africans to rise and build African Continent together.

More photos of the visit