‘Infanticide has become a major challenge in Nigeria’ – NHRC Boss 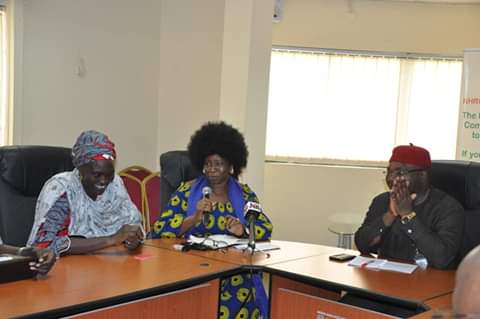 Executive Secretary, National Human Rights Commission (NHRC) Tony Ojukwu Esq has said that infanticide and other related child’s rights violations pose a huge challenge to Nigeria and as such require concerted efforts by all stakeholders to tackle.

The Executive Secretary stated this in Abuja when a delegation of ActionAid International led by the Country Director, Ms. Ene Obi paid a working visit to the Commission.

Ojukwu lamented over the high rate of infanticide, child abandonment and maternal neglect and other children related abuses in the society today pointing out that such vices had necessitated a survey by the Commission which generated stunning statistics about the situation.

The Commission he said is working so hard to confront the atrocities suffered by this vulnerable group adding that perpetrators are in for a tough time.

The Executive Secretary called for the commitment of all stakeholders in raising the bar of awareness, using the traditional and religious institutions within the various communities , most especially where cases of infanticide and other child-related violations are endemic to address the problem.

He disclosed that the Commission would soon hold a public hearing on the disturbing cases of human rights violations against women in FCT allegedly by Abuja Environmental Protection Board and other agencies. He urged victims of these rights violations and relevant Civil Society Organizations (CSOs) to take advantage of the opportunity of the public inquiry to seek redress for these wanton violations.

Earlier, the leader of ActionAid International, Ms. Ene Obi who painted a worrisome picture of various Gender Based Violence (GBV) particularly as it affects the women and children called for urgent action by the relevant authorities towards putting the right policies and legal frameworks in place to effectively address the ugly trend.

She disclosed that ActionAid with the support of European Union (EU) is collaborating with relevant government agencies responsible for the protection of children in 57 communities across five area councils in the Federal Capital Territory (FCT) namely, AMAC, Abaji, Gwagwalada, Kuje and Kwali.

She said that some of the various projects of ActionAid are geared towards increasing awareness on infanticide practices and establishing mechanisms to safeguard unborn babies and infants susceptible to being victims of infanticide, including those currently ostracized .

Ms Obi pledged the readiness of Action Aids to partner with the Commission in addressing the various human rights issues identified especially those bordering on women, children and other vulnerable groups.