‘$1.3bn investments in Nigeria under threat’ – US Diplomat 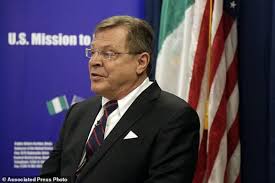 The Government of the United States of America (USA) has declared loss of confidence on President Muhammadu Buhari and the All Progressives Congress (APC) government, expressing disappointment on the performance of the ruling party government.

It was gathered that the United States (U.S.) High Commission Consul-General, Bray, expressing the disappointment of the home government, declared that $1.3 billion American businesses in Nigeria are under threat.

The Consul-General at the 2018 International Investment Conference – Promoting Investment, Connecting Business – organised by the Lagos Chamber of Commerce and Industry (LCCI), in Lagos, identified that the threats to the US investments in Nigeria are coming from instability in the exchange rate, policy inconsistency, poor electricity, dearth of infrastructure, regulatory and security issues.

Bray decried that American investors have problems with the inconsistencies of policies which are made and altered at will, lamenting that the threats have the tendency to discourage investors into the country.

The Consul-General contended that “the threats have the capacity to discourage any investor as there seems not to be a clear-cut obedience to rule of law to protect investors.”

The US Diplomat further bemoaned that Nigeria still has image crisis which needs to be addressed urgently. He observed that though security challenges is still perturbing, it is not sufficient to discourage genuine investors as what they need to do is just to take care of their personal or corporate existence.

Bray advocated the imperatives of developing competitive infrastructure; emphasizing the need to network cities and the hinterlands across the states to facilitate easy movement of goods and services.

33 thought on “‘$1.3bn investments in Nigeria under threat’ – US Diplomat”