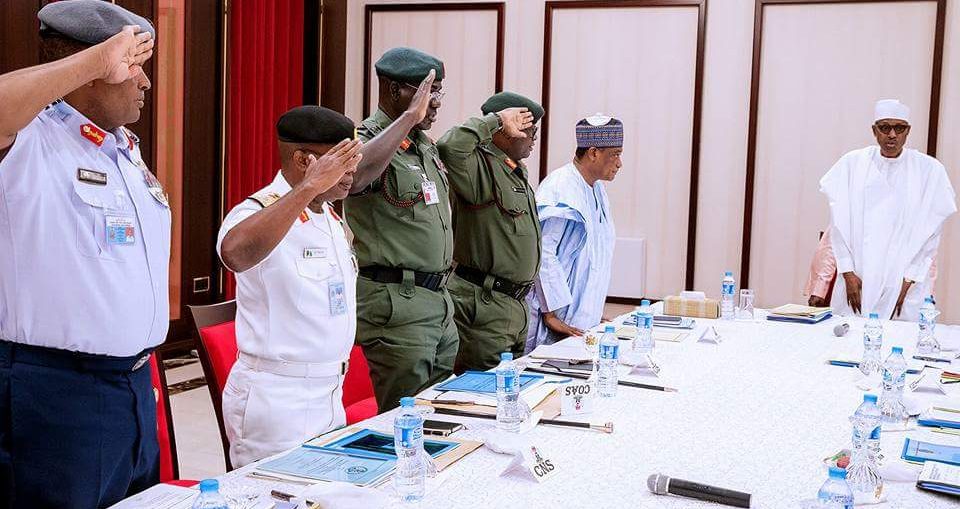 The President Muhammadu Buhari has vowed to deal with any security agency and personnel found wanting or partisan in a manner that jeopardises the free, fair and transparent nature of the 2019 general election.

Buhari’s warning was conveyed on Tuesday by the National Security Adviser (NSA), Maj-Gen. Mohammed Monguno (rtd) at the Interagency Consultative Committee on Election Security (ICCES) meeting at his office in Abuja.

To this end, Monguno warned that the Federal Government will sanction any security agency that abetted rigging of the 2019 general elections.

On his own, the NSA warned that unlike in the past, errant security operatives would face the full wrath of law for any criminal acts, adding that “dereliction of duty will be severely punished”.

He said: “We would not tolerate any unnecessary loss of lives, this is important and fundamental, no innocent lives would be lost. And this has to do with how we carry out our duties. What had happened in the past will not be tolerated.

“NSA is going to descend very heavily on security agencies who as a consequence of their inability to carry out their functions allow lives to be lost unnecessarily. This is very important and I want to stress it. I want to notify all security agencies that I will also not tolerate any collusion, aiding or abetting of criminal elements by security agencies in this process.”

Monguno who is also the co-chair of ICCES further stressed that President Buhari was not concerned about the choice of voters, but that “any infraction by security agencies would not go unpunished”.

He noted that the President had emphasised the importance of ensuring a level playing field for all the political parties, insisting that the 2019 polls must be very transparent and credible.

He continued: “The President is not concerned with anybody’s personal inclination or who he wants to vote but we security agencies, it’s going to be a very serious offence. It would be viewed as a very serious matter. Also, he (Buhari) has said we must ensure a level playing field for all parties, for all operatives.”

“The elections have to be extremely fair and free, the process has to be very transparent and this is a heavy responsibility on our shoulders. Finally, any issue of dereliction of duty by security agents will be viewed with the seriousness it deserves.

“In the past, many agents, individuals have got away scot-free, this time around, I as the National Security Adviser with the co-chair, Chairman of INEC will make sure any individual who compromises or raises any situation that results in casting any aspersion on our own integrity, on the government, is going to be called on the carpet, he is going to answer for that.”

The NSA disclosed that was working with the Attorney-General of the Federation (AGF), Mr. Abubakar Malami (SAN)n to carry out safeguards for the polls.

Also speaking, the Chairman of the Independent National Electoral Commission (INEC), Prof. Mahmood Yakubu, lamented about the growing incidents of vote-buying, which he said is threatening to ruin the image of elections in the country.

Against this backdrop, Yakubu challenged the security agencies to arrest and prosecute anyone found to be indulging in vote-buying.

According to him “vote buying is a punishable offence” and against the electoral laws. He urged the security agents to “make example of anyone found culpable in vote buying” from henceforth.

Speaking further, Yakubu explained that the commission was prepared for the elections, adding that the polls would hold in 180,000 polling units nationwide.

He stated that the electoral body had concluded its election plans, noting that facilities were being repaired “so we could have credible and transparent elections.”

Yakubu disclosed that new ideas would be test-run during the Osun governorship election holding next month, stressing that robust strategies would be deployed against vote buying.

“We must tackle vote buying at polling units, we must not allow this to fly, our democracy should not be for the highest bidder. We are looking at vote booths administration to make it difficult for voters to display their ballots,” he said.

Meanwhile, the ICCES in a communique signed by AIG Peace Ibekwe- Abdallah, noted tjat NSA as the Coordinator of all security agencies would ensure that capacity building initiatives and effective inter-agency collaboration frameworks were evolved to guarantee seamless security deployments and prompt response to threats during the 2019 General Elections.

“Code of Conduct for all security agencies will be developed to guide the operations of officers to be deployed and to hold them accountable for their actions in their line of duty.

“Citizens’ rights will be fully protected to the extent that they perform their civic obligations within the dictates of the law. Electoral offences and sundry misconducts that could threaten national security and the electoral process will, however, be firmly but professionally dealt with. These include ballot boxes snatching, disruption of the voting process through acts of thuggery, vote buying, armed violence among others,” part of the communique read.

Apart from Monguno and Mahmood Yakubu, the meeting was attended by the Acting Director-General of the Department of State Service (DSS), Mr. Mathew Seiyefa, Deputy Inspector-General of Police, Habila Joshiak, and other heads of security agencies.

143 thought on “Ahead Of 2019 Elections, Buhari Reads Riot Act To Partisan Security Agents”