Borno IDPs: Soldiers raped us in camps but we were forced to deny it 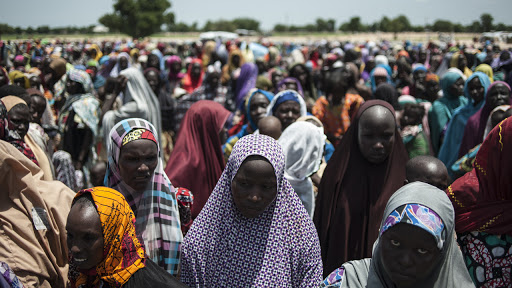 Internally displaced persons (IDPs) in the north-east say they are being suppressed from opening up on the alleged sexual abuse ongoing in their camps.

They have also called on President Muhammadu Buhari to send an independent investigative panel to the camps regarding the issue.

Amnesty International released a reportalleging that soldiers and members of civilian joint task force (JTF) demanded sex from IDPs in exchange of food.

The military subsequently led some journalists to various IDP camps and at the end, they said no case of sexual abuse was discovered.

“I have interacted with the stakeholders in the camps and they said that the Nigerian armed forces have neither molested, sexually assaulted nor raped any IDP as alleged by Amnesty International’s recent concocted report,” John Agim, acting director of defence information, said during the visit.

However, the IDPs have said they were asked to say “there were no issues” in the camp during the visit.

They spoke in a statement issued Monday, under Knifar, a movement of women IDPs in the region, and led by Hajiya Hamsatu Allamin, a rights activist.

The statement published via the movement’s Twitter handle read: “The military came to Dalori with journalists to ask us displaced women if we were raped. Before the visit, the women were told to say everything is fine, that there are no issues. Is this the way our complaints are handled?

“One of our members was there. She has an 18-month-old son, fathered by a soldier. Too scared and intimidated to speak, she said nothing. No one spoke. Why are we forced to be exposed in such a way?

“It happened to us. It is real. And we formed our group to allow women to get accountability. We have said it before. We are ready to speak but we can not imagine this is the way to do this.”

They asked Buhari to hear their cries and “investigate the soldiers who raped us when we were in Bama.”

“Our children died because there was not enough food, unless we had sex with soldiers,” they said, adding: “We have said it before: we are ready to speak to any investigation team the president sends to us. We only ask it will not be led by soldiers as they are also the ones who abused our women.”

Texas Chukwu, army spokesman, did not answer calls made by TheCable or reply the text message sent to his mobile phone regarding the IDPs’ claim.