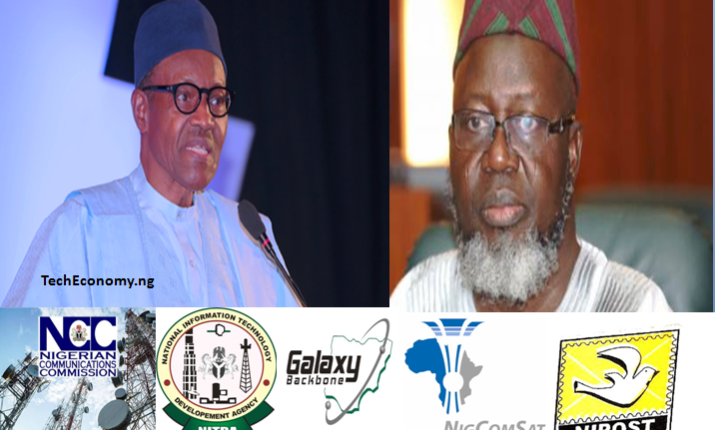 The experts who spoke to TechEconomy.ng regretted that by omitting the critical sector in his speech the Presidency has demonstrated negligence to the sector that currently contributes over 10% to the nation’s gross domestic product (GDP).

Recall, recently, the Nigerian Communications Commission (NCC) announced and in compliance with the Fiscal Responsibility Act of 2007 (FRA 2007), it remitted N49,792,870,113.00 (Forty-nine Billion, Seven Hundred and Ninety-two Million, Eight Hundred and Seventy Thousand, One Hundred and Thirteen Naira Only) to the Federal Government Consolidated Revenue Fund (CRF) within the first four months of 2018. https://techeconomy.ng/2018/04/26/just-in-ncc-remits-n49-7b-to-govt-in-first-quarter-2018/

However, in his speech, explained how the economy is doing per sector, only that ICT sector was consciously missing in his national broadcast on Tuesday, May 29, 2018.

This government has not prioritised ICT- ATCON

The National President, Association of Telecommunication Companies of Nigeria, ATCON, President, Mr. Olusola Teniola also in a response to TechEconomy.ng’s questions said, “In fact, it is now obvious this government has not prioritised ICT. There will be adequate change in the economy only when ICT is given its rightful place in the programmes of the government.

Nevertheless, we shall continue to advocate for better understanding and for the government to pan its attention towards this industry. That’s all I can say for now.

Reacting to the President’s speech, the Chairman, Association of Licensed Telecommunication Operators of Nigeria (ALTON), Engineer Gbenga Adebayo, said it is not something to rejoice about.

“What it simply means is that the President and those around him no longer regard the industry as a major concern in terms of infrastructural development; we (operators) are not on the front-burner issues considered in the corridor of power. That is not to say they should feel less concerned now, because this sector is yawning for more investment, among other economic issues faced by operators.

“Even the existing infrastructures require protection. Yes, they should be considered as critical national infrastructure because ICT impacts every sectors of the economy. So the government needs to improve on its approach to this industry”, Engineer Adebayo told TechEconomy.ng on phone.

It was very surprising- CPN

Also, the Registrar, Computer Professionals Registration Council of Nigeria, Mr. Allwell Achumba told TechEconomy.ng that he felt bad about it.

His comment: “I was set aback; it was very surprising. We need ICT in addressing national security; we need ICT in agriculture, even in the oil sector. There is no part of the economy that does not need ICT. It was surprising that ICT sector was not mentioned in Mr. President’s speech.

“Any nation that neglects ICT is asking for doom. I was even thinking of talking to the NITDA DG about this”.

The CPN Registrar said although the Presidency has been trying fix the economy, nonetheless, the tempo around ICT should be increased.

“NITDA has been conducting trainings for the MDAs, and in some States. Recently, they started ICT training for persons with disabilities; however, the message should sink that we can’t achieve much if we neglect IT. Today, the sector contributes about 10% to the nation’s GPD. It is such a huge industry to be relegated”, Achumba said.

Running an analog government will do the Nation no good- Oyedokun

“I think the omission is an indication which buttresses on the fact that the administration needs to refocus in terms of reliance on ICT for good governance.

“It is so sad in these days and times, that Nigeria that a good number of African countries look-up to, is yet to harness the full potentials of ICT.

“Running an analog government will do the Nation no good, and will reduce our chances of effectively competiting with other nations in these age of digital revolution”, he told TechEconomy.ng.

On his part, the CEO of Jidaw Systems, Mr. Jide Awe said that government needs to be more serious with local content in IT.

His response to TechEconomy.ng: “Government should place more emphasis and priority on ICT to further strengthen the local sector and deepen its impact on critical areas of development such as education, health, the economy and so on.

“It needs to empower agencies such as NITDA and CPN to ensure increased local content development and the attendant benefits to the country in terms of job creation, economic growth, improved public services, etc.

“Broadband infrastructure is also critical. Real movement is needed on broadband penetration. Address issues that have been stalling issues, hindering infraCos and Update and implement national broadband plan.  More attention is needed. Again if this is addressed it will impact youth employment, empowerment, enterprise and innovation positively which will actually determine the future of the country”.

I found it devastating- Emembolu

The CEO of Crestsage Technology, Mr. Uchenna Emembolu, said he was devastated by the omission.

Hear him: “I found it devastating. It just shows that there is a lack of understanding by the government of the day on the huge contribution of ICT to Nigeria today and its greater impact on our national welfare in the immediate future. Each speaks to what they understand.

Asked if it in any way concerned with the leadership at the Ministry of Communications, he told TechEconomy.ng, “It does partially. The main issue though is a lack of understanding by the Presidency because if they appreciated the national importance of ICT and the Minister weren’t meeting up, as he clearly isn’t, he would have been sacked a long time ago”.

The government should do more- DigitalPR-Wire Founder

To the Founder of DigitalPRWire.com, Mr. Celestine Achi, government should look deeper into the sector which has overtaken the oil industry in terms of job creation.

He said, “It’s quite unfortunate that this administration has failed severally to recognize the contribution of the ICT sector to the growth of the economy. For the 1st time in all our years as a nation, we saw ICT contributing a reasonable percentage to the GDP above the oil and gas sector without any government intervention, solely private driven and here we are talking about growing the economy and growing out Naira and yet this sector is left out?

“Currently ICT is contributing close to 10% to the GDP which is quite substantial.

“Same ICT has overtaken oil and gas in job creation and has created more entrepreneurs in Nigeria, not forgetting the FDI opportunities the ICT sector has created”.

Continuing, he told TechEconomy.ng that the government should do more as a focal objective to create a more conducive environment “and why not tax rebate and a more meaningful and less frustrating fictional broadband”.

Shittu’s Aide absolves Minister, blames those at the villa

When contacted, Special Assistant to the Minister of Communications, Mr Adebayo Shittu, absolves of any wrong-doing, stating that the Ministry has achievements to showcase.

The Minister’s aide, Kemi Adeola, said the omission could be attributed to an oversight on the part of those within the Presidency.

“It is an oversight on the part of the ‘villa’, because all Ministries submitted their achievements to them”, She said promising to make further responses after studying the Ministry’s submission to the villa.

These agencies generate revenue for the Federal Government