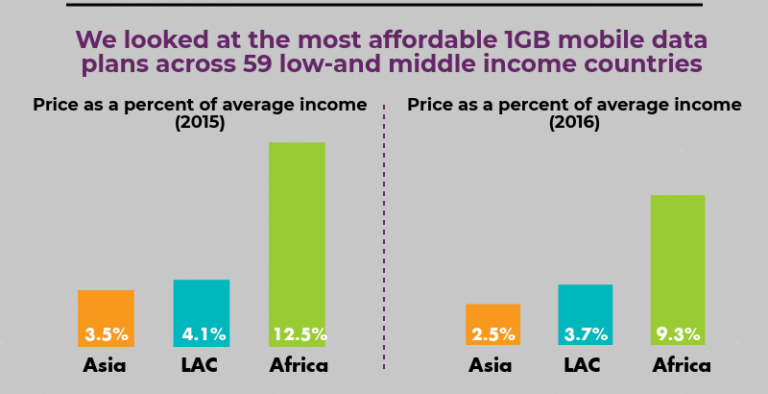 Alliance for Affordable Internet (A4AI), an initiative under Web Foundation working with coalition of organisations, bodies and agencies in the developing countries across Asia, Latin America, Caribbean and Africa with aim of improving broadband penetration and ensure internet affordability across board. This is inline with UN SDGs goal of “Leave no one behind”.

Based on several researches carried out globally by the coalitions, A4AI has released New Broadband Pricing Data that will help countries make well informed decisions toward improved broadband penetration and its affordability even to the unserved areas

Read the report below

In our 2015-16 Affordability Report, we set out a new “1 for 2” affordability threshold — 1GB of mobile prepaid data for no more than 2% of average monthly income — in order to enable all income groups to afford a basic broadband connection. We assessed whether countries were meeting this target in our 2017 Affordability Report, and today, we are excited to share with you an update to that assessment, based on more recent pricing and income data.

This new data — which analyses the cost of 1GB of mobile prepaid data across 59 low- and middle-income countries at the end of 2016 — finds that while affordability continues to improve across the board, the cost to connect remains out of reach for many. Just 19 countries have affordable internet (i.e., meet the “1 for 2” target), and the cost to connect averages nearly 6% of monthly income across the 59 countries surveyed.

While the Asia-Pacific region boasts the most affordable broadband — 1GB of data costs citizens, on average, 2.5% of monthly income — not one of the regions surveyed meets the “1 for 2” target. Costs remain highest in Africa, with 1GB costing 9.3% of a citizen’s average income; however, Africa also experienced the most significant cost reductions of any region — an average drop of 3.2 percentage points across the continent drove most of the global improvement in affordability seen in this data.

While prices are dropping globally, affordability continues to be a major obstacle to access — an obstacle that is compounded by high levels of income inequality. Even in countries like Colombia and the Philippines, where 1GB is priced at around 2% of average income, the lowest 20% of income earners have to pay 11% and 6% of their income, respectively, for 1GB of mobile data. Mobile network operators in some countries are responding to the issue of income inequality through market segmentation — i.e., by offering very small plans (50MB or 100MB) or very big plans (2GB and above). One implication of this trend is that using a single price point (e.g., 1GB) to assess affordability might not be appropriate for all countries, and having additional price points (e.g., low, medium, high) will be useful — something we will explore in further updates.

Map: What does it cost to purchase 1GB of mobile broadband data?

You can explore the data and find full datasets for download here.

We plan to produce annual updates to this mobile pricing data for low- and middle-income countries, and to assess annually the extent to which countries are making progress toward meeting the “1 for 2” target.