WaterAid calls for action as report names Nigeria among hardest places in the world for women to find a toilet! 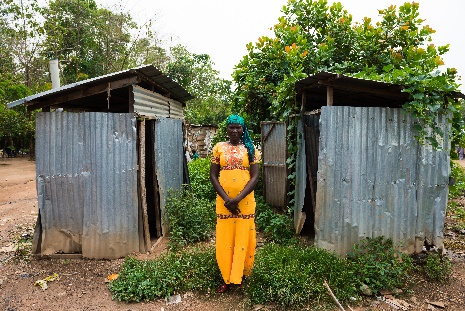 Nigeria is in the top 3 worst countries in the world for the number of people without toilets, reveals WaterAid’s State of the World’s Toilets 2017 report. As a result, nearly 123 million people still suffer the fear and indignity of relieving themselves in the open or in unsafe or unhygienic toilets – a situation that is most dangerous for girls and women.

‘Out of Order,’ WaterAid’s third-annual analysis of the world’s toilets released ahead of World Toilet Day, reveals that globally, one in three people still have nowhere decent to go to the toilet, and demonstrates how women and girls bear the brunt of this global crisis. For more than 1.1 billion women and girls, this injustice results in an increased risk of poor health, limited education, harassment and even attack.

Nigeria, Africa’s most populous country, comes in at third place for the worst countries for the numbers of people with access to basic sanitation. Despite being sub-Saharan Africa’s biggest economy, it is also sixth worst for addressing open defecation, with the percentage of people defecating in the open increasing from 22.6% in 2000 to 25.5% in 2015.

The proportion of people without basic sanitation has also gone up, and two thirds of schools have no decent toilets. This sanitation crisis contributed to the deaths of nearly 60,000 children each year from related diarrhoeal diseases

“Seven in ten people in Nigeria have nowhere safe to go to the toilets, equating to an overwhelming 123 million people. This denial of human rights contributes to the deaths of around 165 children under five every single day, and holds women and girls back from fulfilling their potential.

“We need urgent action to turn this situation around. Addressing the sanitation crisis with particular focus on the needs of women and girls will help lift entire communities out of poverty.

“We often call on Government to prioritise sanitation and investment in the sector and while this is as it should be, sanitation is really everyone’s responsibility. We all have a part to play – as individuals, property/home owners,  families, work groups, unions and associations, civil society organisations, the media, the private sector, and yes, Government at all levels.”

Among the other findings in the report released by WaterAid this World Toilet Day:

• All 10 of the world’s worst countries for access to basic sanitation by percentage are in sub-Saharan Africa, where only 28% of people have a decent toilet, and children are 14 times more likely to die before the age of five than in developed regions.

• Ethiopia is top of the list of countries with the greatest percentage of people living without decent toilets. Conversely, Ethiopia has also made the most progress in reducing open defecation, largely by investing in rudimentary community latrines.

• Djibouti, a major route for refugees from the Yemen war, has the worst figures for open defecation, with a 7.2% increase since 2000.

What WaterAid Nigeria is doing this World Toilet Day:

The theme for 2017 World Toilet Day is ‘Wastewater’ in line with the Sustainable Development Goal’s aim to reach everyone, everywhere with sanitation, and halve the proportion of untreated wastewater and increase recycling and safe reuse. For that to be achieved, we need everyone’s waste to be contained, transported, treated and disposed of in a safe and sustainable way.

This World Toilet Day is an opportunity for us to strengthen and sustain partnerships among stakeholders, especially aimed at raising awareness, mobilising and inspiring community actions to tackle the global sanitation crisis. WaterAid is joining the Youth WASH Network, UNICEF, Action Against Hunger, the Federal Ministry of Water Resources and other partners under the auspices of the National Task Group on Sanitation to commemorate this year’s World Toilet Day with a Toilet4All campaign.